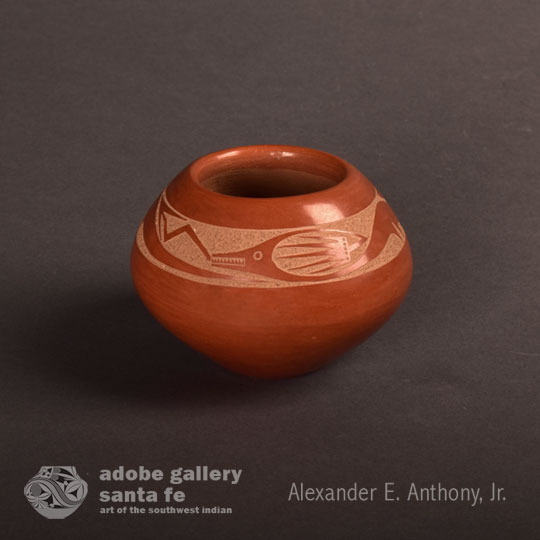 This is an exceptional red carved jar of the sgraffito style, featuring an avanyu (plumed water serpent) encircling the upper body of the vessel, made by San ildefonso Pueblo artist Tony Da, son of Popovi and Anita Da, and grandson of Maria and Julian Martinez.

Tony Da started his art career as a painter at a very young age and continued painting throughout high school and afterwards.  It was not until he lived with his Grandmother, Maria Martinez, that he became a potter. He moved in with Maria in 1966 and began the process of making pottery under her tutelage.  His timing was perfect as the 1960s was a period of great interest in pueblo pottery.

Tony mastered the techniques of pottery making very fast and in a short time was making very thin-walled pottery, thinner than those of Maria.  Clara, Maria's sister, polished most of Tony's pottery as she did those of Maria. She did this throughout his career until she retired in the late 1970s from polishing pottery of family members.  His dad, Popovi Da, set the standards of quality for Tony and never let up on doing so. In two short years, Tony had mastered the techniques and was producing pottery of the highest quality and beauty.

In 1967, Tony entered competition at the Gallup Inter-tribal Indian Ceremonials with eight pieces for which he won seven first place awards and one second place. This small jar is typical of works by Tony Da in the late 1960s and early 1970s.  It is signed with his traditional DA signature.

Provenance: from the estate of a family from Las Vegas, Nevada