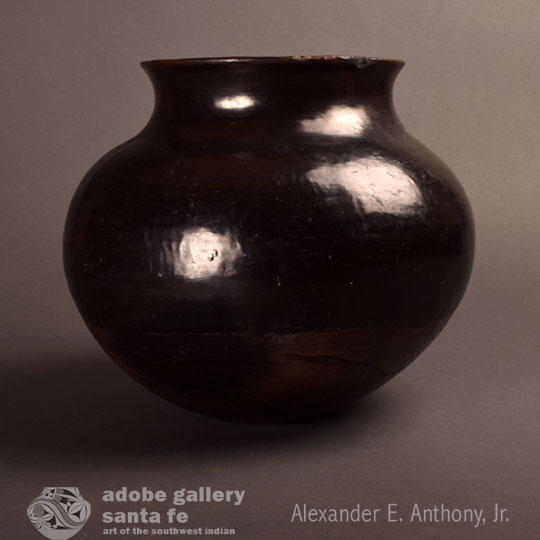 This is a traditional San Juan Pueblo tinaje or water jar with a polished black upper body and polished gray underbody, a style which has been made for centuries. In such jars, a red slip is wiped over the upper two-thirds of the vessel body and the lower one-third left is without slip.  Both upper and lower portions are then stone polished. When fired in a reduction atmosphere, the red changes to black and the tan underbody changes to gray. The interior of the neck is matte finish.

This jar has a beautiful globular shape which gracefully curves at the neck ending in a turned out rim.  It is such shapes that captures the eyes of collectors, particularly when the jar is so well stone polished, as is this one.    It probably dates to circa 1890-1910 period.

The arrival of the Spaniards in the late 1500s had very little effect on pottery production at the pueblos in either shape or design, but by the 1700s, there were noticeable changes.  Still later, with the opening of the Santa Fe Trail in 1821 and the arrival of the transcontinental railroad in 1880, change became inevitable at pueblos located close to the non-Indian populations.

San Juan Pueblo, now Ohkay Owingeh Pueblo - Place of the Strong People, stuck to its original pottery traditions of simple undecorated utilitarian wares that were so beautiful in vessel shape and simple slipped surfaces highlighted by fire clouds.  Even today, a hundred years after the pueblo abandoned its traditional style for a more modern style to appeal to tourists and collectors, the beautiful undecorated wares of the pueblo are still capturing the eyes of collectors.  Vessel shape and surface finish are the keys to the beauty of San Juan blackware. There is no painted design to distract from the beauty of shape and sheen. The only decoration is the occasional fire clouds resulting from outdoor firing. Most collectors eventually warm up to the simplicity of San Juan pottery.

For those who wonder why San Juan potters only applied slip to the upper 2/3rd of a jar, the answer comes in comparison with pottery from other Tewa-speaking pueblos. Potters from all the Tewa-speaking pueblos apply slip only to the upper parts of a jar, leaving the lower part un-slipped and stone polished.  Because the upper parts of jars are painted with designs, the lower unpainted part does not attract attention. San Juan potters have just done the same, but it appears more unusual since there is no painted design on the upper section and one wonders why they did not apply the slip all the way down. The answer is it is a Tewa tradition that only appears more prominent because there are no painted designs to offer distractions.

Provenance: from the collection of a family in the process of down-sizing its collection.