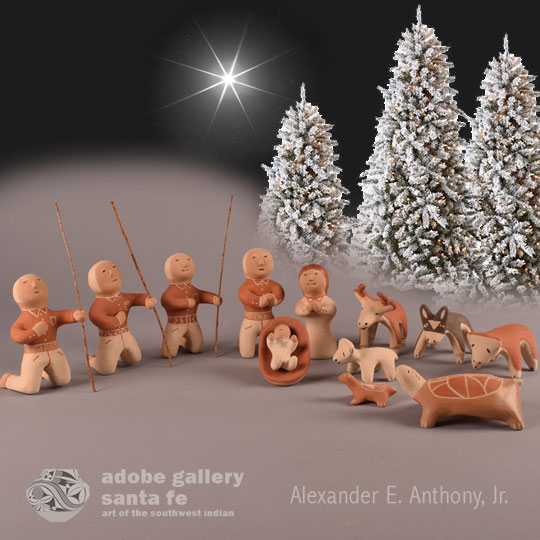 This San Juan Pueblo Pottery Nacimiento by Reycita Garcia consists of twelve individual pieces.  There are three pueblo men, each with a wooden staff, Mary, Joseph, the Baby Jesus resting in a separate cradle board, and five animals—a bull, cow, turtle, lamb, and baby turtle.  The figures were finished in matte painting of soft beige and rust red. Mary’s shawl was stone polished.

Each of the pueblo men is dressed in button-up shirt and long pants.  They each wear a belt. Mary is dressed in a button-up dress. All the figures wear traditional moccasins. Her figures show detail in the clothing and faces.

Reycita Garcia (b.1931-) began making pottery in the early 1950s and didn't make nacimientos until 1967.  The slip or paint that she used on her figures is typical of that used for pottery in this village.  As is typical with Reycita's nacimientos, all the human figures have buff colored hair. Very thin twigs have been placed in the hands of the male figures.  The set is signed Reycita Garcia San Juan Pueblo under the red manger.

Provenance: from the collection of a gentleman from North Carolina who purchased it from the potter in 2001.