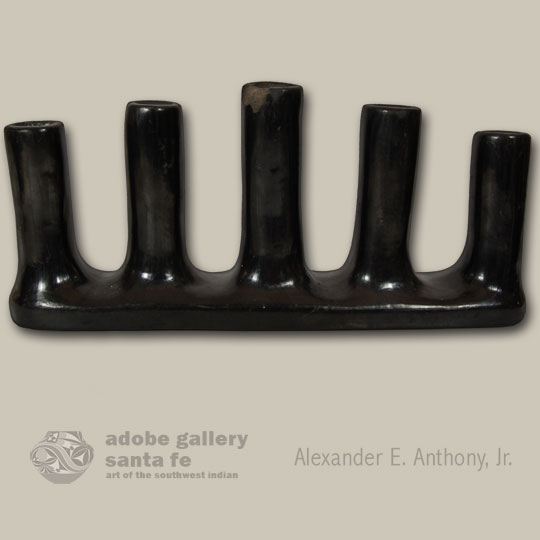 This five-stem black polished candelabra was not signed by the artist at the time it was made in the 1930s. Items such as this were made to be sold to residents of Northern New Mexico who desired to add a selection of Pueblo-made pottery to their homes for decorative purposes. Some items, such as this, were more than just decorative as they were usable.

“We’ve never seen a candleholder made before 1880, the date railroads came through.  It’s easy to conclude that Indian potters never made any until the traders pointed out their marketability. . . .Contemporary Spanish accounts indicated that pueblo potters made utilitarian pottery for the settlers as well as for themselves, and anything the Spanish needed. If they made candlesticks, salt shakers, and the like, these pieces have disappeared, perhaps regarded as no more valuable than we regard a paper plate or a plastic cup.”  Hayes and Blom,1998:20

Condition: this Santa Clara Pueblo Five-stem Black Pottery Candelabra is in very good condition except for a chip on one of the five stems

Provenance: from the collection of a gentleman from the Midwest