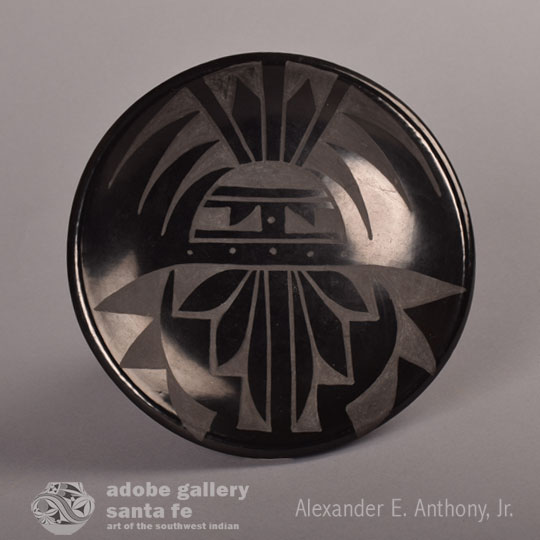 Although somewhat abstract in presentation, the design on this Santa Clara Pueblo Black on Black Pottery Dish by Legoria Tafoya appears that of a Long Hair Katsina.  An analysis would indicate that the two pointed features at the top are feathers on the head of the mask, which appears as a half-dome with a pair of triangular eyes.  The arrangement below the mask could represent a long beard as in the Long Hair Katsina. Of course, the design is what one sees in it.

Legoria Tafoya, Pablita Velarde, and Jane Baca were sisters.  Legoria was the oldest and Pablita the youngest. Legoria devoted her career to making traditional black pottery in the Santa Clara Pueblo style, and so did her sister Jane Baca.  Pablita Velarde (1918-2006) Tse Tsan - Golden Dawn is the one who chose to be an easel painter. All three sisters were exhibited at Enchanted Mesa Gallery in Albuquerque, owned by Fred and Margarete Chase. "Legoria was one of the first Santa Clara artists to have a brochure with her personal biographical statement.  The document states in part: 'Along with many other children of the Rio Grande Pueblos, Legoria attended St. Catherine's Indian School at Santa Fe...Married quite young to Pasqual Tafoya, Legoria was soon very busy with a family of her own.  Marriage, children, and the resultant responsibilities prompted Legoria to become interested in making pottery to sell to supplement the family income.’

“In 1930 Legoria learned the techniques of pottery making from her grandmother . . . Legoria's first work consisted mostly of clever, small animal figurines, which she molded with her fingers.  Lions, bears, birds and turtles are design forms which are much in evidence in Tewa mythology. These little fetish-like ceramics proved to be extremely popular, and Legoria sold many of them to the tourists who came to the Pueblo . . . Legoria decided to exhibit her work.  At her first exhibit in 1940 she won a blue ribbon for a plain polished bowl. This was at the Indian Market at Santa Fe . . . Legoria received many awards for pottery making . . .'" (Schaaf 2000).

Provenance: from the collection of a family from Nevada