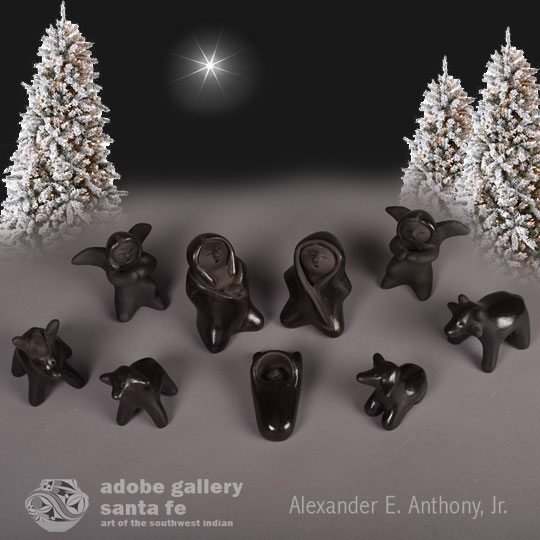 Paul and Dorothy make most of their pottery figurines in the black-on-black style, but have made red-on-buff style on occasion.  This nine-piece black-on-black nacimiento is typical of their work. It consists of the Holy Family, two angels and four animals.  The slip was stone polished and portions left in a matte finish. Paul and Dorothy work together and both their names appear on this set.  It is dated November 1999.

Dorothy’s maiden name was Pinto. She is of Diné descent and was born in Gallup, New Mexico, in 1940.  Though she had no early training in pottery making, her mother was an expert weaver and she was exposed to the traditional Navajo crafts.  After attending Torreon Day School on the reservation, she went to Haskell Institute at Lawrence, Kansas, and then the Indian School at Albuquerque.   She and Paul and their two sons live at Santa Clara Pueblo.

Paul and Dorothy were included in the book Nacimientos in 1979 when the first edition was published.  One of their red-on-buff nacimientos was included in full color.  I have been told that Paul (c.1938-) and Dorothy (1940- ) are no longer active potters but I have not yet verified this.

Provenance: from the collection of a gentleman from North Carolina