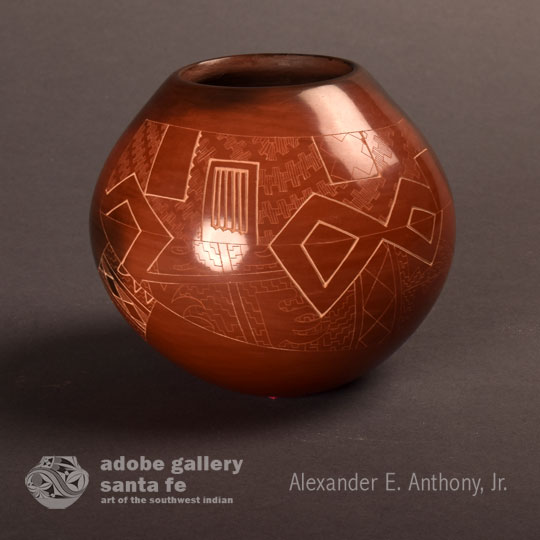 This pottery jar beautifully displays levels of sgraffito design ranging from light incisions to more intense ones.  Over a red slip, Santa Clara Pueblo artist Jody Folwell carved geometric designs into the clay in varying depths. The lightest incisions are parallel lines and stepped elements.  Deeper incisions resulted in geometric elements. The deepest incisions are parallel lines in a rectangular box. All of these are on a red slip with beautiful fire clouds on the surface.

Jody Naranjo Folwell (b. 1942) is the daughter of Rose Naranjo and mother of Polly Rose & Susan Folwell. Jody, like her mother, is very creative in designing jars.  Her siblings are noted sculptors, potters and educators. Jody has a formal education in history and political science, earning B.A. and M.A. degrees.

“She is known for making pottery with a message.  Her themes range from women’s rights to children’s dreams.  Her subjects run the course from ancient symbols to Pop Art whimsy.  She deals with tough political and social issues. Her pots make people think.” Schaaf 2000

Jody was selected, in 1987, “as a top contemporary Indian artist by the Southwest Museum in Los Angeles for a major exhibit, Eight Indian Artists II. . . . [She] was the subject of a PBS film inspired by the exhibit.” Schaaf 2000