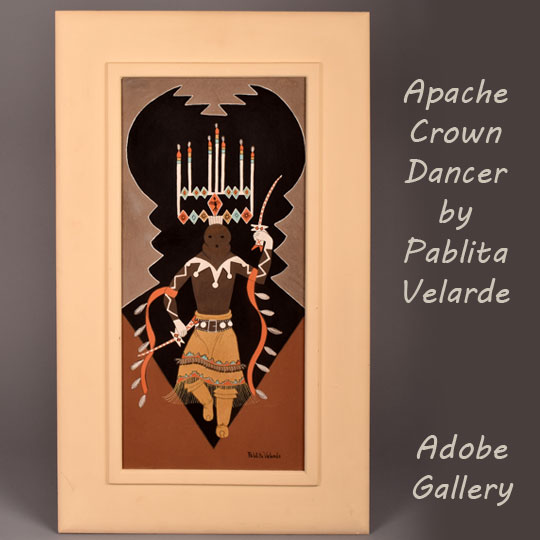 This original earth mineral painting was created by Santa Clara Pueblo artist Pablita Velarde.  It is an excellent example of the handmade mineral earth works for which she is well known.  Her subject here is an Apache Crown Dancer, also known as a Gaan Dancer.  This dancer’s ceremony is of great significance to the Apache.  It is often depicted in their artwork.  It’s a treat to see it in a Pablita Velarde painting.  Perhaps not surprisingly, Velarde’s depiction of the Crown Dancer is one of the finest we have seen.

Velarde’s dancer carries two “swords,” which are made of yucca or wood.  His massive crown has been decorated with various symbols.  Each color represents one of the cardinal directions, as does the dancer himself.  Three other dancers participate, representing the other cardinal directions, and a fifth dancer serves as the “messenger.”  They are intense-looking dancers, but the ceremony is sacred and relates to healing.  Velarde’s depiction is excellent, with careful attention to detail and a bold, earthy color palette.  This is an outstanding image from one of the early Pueblo greats.

The painting is signed Pablita Velarde and framed in the original frame.  Apache Crown Dancer is handwritten on the back of the frame.

Velarde painted in the traditional style of the Santa Fe Indian School, creating accurate portraits of Native American life and culture. At first, she worked in watercolor, but later learned how to prepare paints from natural pigments—a process called Fresco Secco.  She is best known for these mineral earth paintings. She ground mineral and rock elements on a metate and mano until the result was a powdery substance. From this substance her paints were made. She also painted on paper, often using casein in addition to earth pigments. She was also known to create art derived from the Navajo sandpainting tradition.  Velarde’s list of accomplishments and accolades is long and varied.  Her works have been exhibited around the country and are included in many prestigious public and private collections.  Author and anthropologist Clara Lee Tanner called her the “greatest woman artist in the Southwest.” Velarde passed away in 2006.

Condition: good condition with a thin scratch and minor discoloration near the dancer’s head

Provenance: this Original Painting of Apache Crown Dancer by Pablita Velarde is from the estate of Joseph Becker, owner and operator of Anasazi Indian Arts in Espanola, N.M from 1978 until his death in 2013.