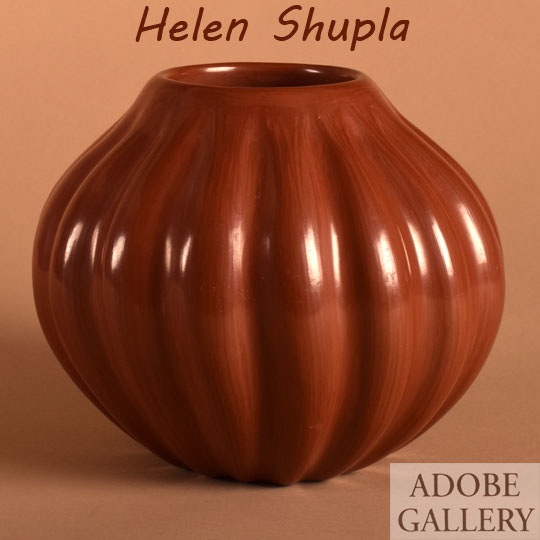 This ribbed redware pottery jar was created by Santa Clara Pueblo artist Helen Shupla.  Shupla was known for mastering the melon jar form seen here. Looking at the inside of the jar reveals that she made the ribs by pushing outward from the inside.  Shupla pioneered this technique while others were still carving clay off of vessels to form ribs.

This jar is a fine example of Shupla’s innovative contribution to the world of Santa Clara Pueblo pottery.  Its shape—round, with a flat bottom and an upturned rim—is graceful and elegant. Its rich red color is fantastic.  A visiting client who collects historic pottery asked if this piece came from San Juan Pueblo, and his question made sense—the jar’s color is nearly identical to that of the handful of historic San Juan redware pots displayed on our shelves.  Many contemporary Santa Clara pieces are a bit brighter than this piece’s gorgeously subdued red tone. As per Shupla’s usual, each rib is identical in shape and size. They bend outward, reaching their widest points at the vessel’s midbody. This beautiful pot deserves the attention of collectors who appreciate excellent contemporary Native pottery. Artist Helen Shupla (1928-1985) was of Santa Clara Pueblo and Tohono O'odham (Papago) heritage.  She was active as a potter from around the mid-1940s until her death. Her husband, Kenneth Shupla, was a Hopi carver who moved to Santa Clara when he married.  It is traditional for the husband to move to the wife's village. Their daughter married Alton Komalestewa, also a Hopi. He was mentored as a potter by Helen and began making melon jars in her style.  Shupla’s works are highly sought by today’s collectors.

Reference: Talking With the Clay: The Art of Pueblo Pottery by Stephen Trimble