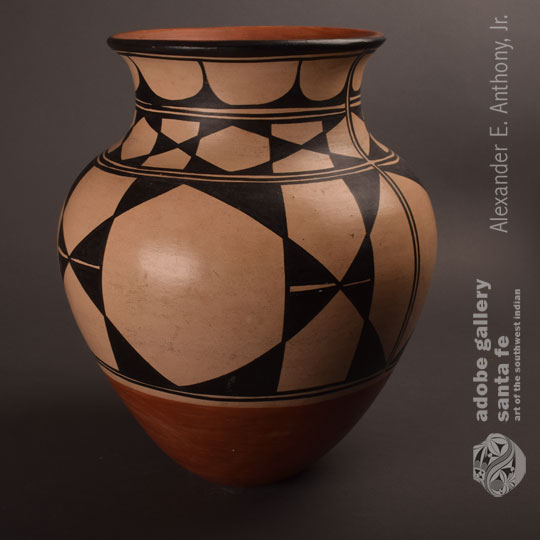 The Aguilar sisters of New Mexico’s Santo Domingo Pueblo created pottery masterpieces long before they created the bold black and Black-on-red designs for which they are remembered today.  Their early style, which they continued making into the early 1900s, was comprised of geometric black designs on a cream background slip. This jar is very typical of their fine early-career work, however, it is larger in size than most that they made.  At 13-½” tall, it stands a couple inches above their standard jar size. They did make larger storage jars on occasion, too, but they’re not often available on the market. This is one of the largest Aguilar jars we’ve ever handled.

Their designs, their precision with pigment application, and the overall appeal of their work set them apart from most potters of their day.  The design on the body of this jar and around the neck is comprised solely of black triangles. The design may be viewed in one of two manners—black design on a cream background, or a cream design outlined by black triangles.  Around the upper neck, we see a similar situation in that the cream slip background emerges as a design element because of the black pigment that outlines it. The black guaco pigment was always applied in a strong and consistent fashion; with the thick application resulting in eye-catching designs like these ones.

It is safe to say that most often, the Aguilar sisters decorated their jars in three static design sections—the main body, the shoulder, and the neck.  In relation to designs, Chapman stated (p.30) that 50% of all early 20th century Santo Domingo jars featured one of only six decorating themes. The black triangle arrangement of this jar is one of those six designs.  We see then that the Aguilar sisters at first followed pueblo tradition in their designs.

*According to Kenneth Chapman, the Spanish term of olla is for cooking pot, and tinaja is for water jar.  Since olla is used for a water jar by most collectors, it has been decided to avoid these words in favor of using general accepted English terms.