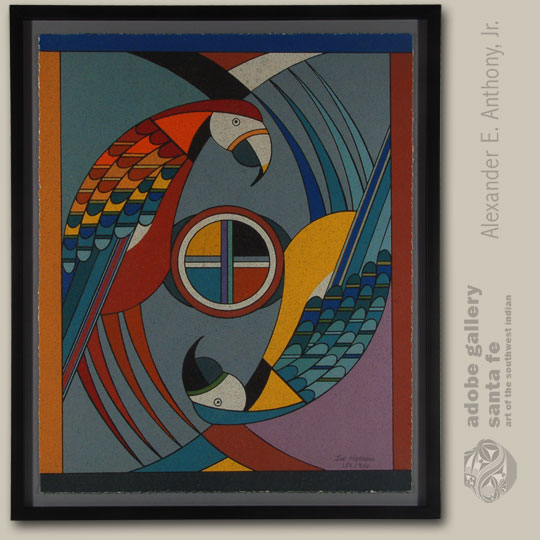 Joe Hilario Herrera (1923-1990s) See Ru was an innovative and successful Native American painter.  His father was from Cochiti Pueblo, and his mother—pioneering painter Tonita Vigil Peña (1893-1949) Quah Ah—from San Ildefonso.  Though his artistic inheritance and early art education came from his mother, Herrera is considered to be from Cochiti pueblo. He attended the Santa Fe Indian School, served in the US Army during World War II, worked at the Laboratory of Anthropology, and eventually completed a degree in art education at the University of New Mexico.His early works were very much in keeping with the style of his mother and her contemporaries.  He painted pueblo dancers in very traditional Indian School style—flat dimension, no ground plane, no background or landscape.  Later in his career, because of the influence of modernist artist Raymond Jonson of the University of New Mexico art department, he took an interest in abstract and modernist painting.  He was one of the first Indian artists to move away from traditional representational art into the more abstract forms of self-expression.In her book Southwest Indian Painting: A Changing Art, Clara Lee Tanner describes Herrera’s innovative style: “In the mid-1950s, Herrera developed a style which was encouraging for the future of Indian painting. The rich design-lore of the past and much that is prevalent in religious forms today he combined into abstract painting.  Again it is the clever manipulation of the age-old and omnipresent themes—sun, moon, clouds, rain, lightning, kachinas, birds, the sacred serpent…The end product is essentially Indian; it is also modern, for abstract art is preoccupied with form and color and pattern.” Dorothy Dunn’s American Indian Painting of the Southwest and Plains Areas states that he “did justice to a fine tradition in his authentically drawn ceremonial subjects.  His work was unlike that of his renowned mother, Quah Ah, for his was coolly decorative where hers was warmly natural.” This excellent untitled serigraph is an example of Herrera’s taste for the “coolly decorative.”  Here, the viewer sees two parrots—identical in form but quite different in color—perched on a circular form. Within the circle, a pair of colored lines crosses over a similar pair, dividing the circle into four quadrants. Were it not for the color variations, the image would have perfect rotational symmetry.  Herrera’s decision to vary the birds’ colors was a wise one, though, as the widely varied color palette adds density and energy to the image. Effective, too, was his decision to cover the entire image with small multicolored dots, adding to it an intriguing texture. While the technical details and the artist’s historical significance are noteworthy, this serigraph’s most endearing trait is that it is, quite simply, a genuine pleasure to view.

Condition: this Serigraph of Two Colorful Parrots is in excellent, original condition

Provenance: from a family in Albuquerque 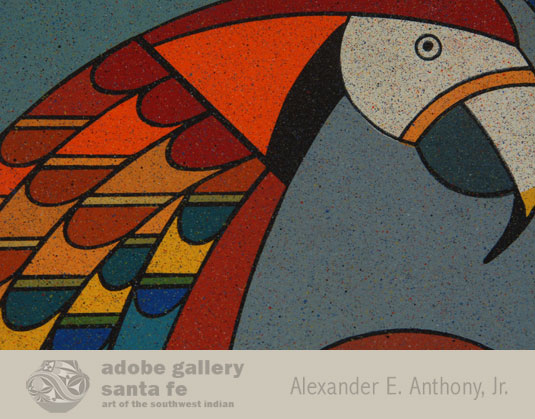