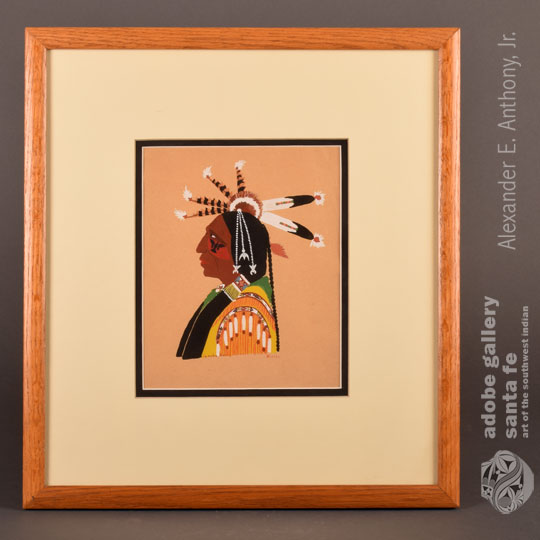 This Kiowa print titled “Apache Man” by Stephen Mopope used a stencil-based technique done by hand that is extremely time-consuming resulting in unique color and texture.Stephen Mopope was one of the Kiowa Five painters whose works were selected for reproduction by the porchoir process and executed by C. Szwedizicki, in Nice, France in 1929. This image is one of those in the portfolio of 24 images. The artist represented were Spencer Asah, 1905-1954; Stephen Mopope, 1898-1974; Jack Hokeah, 1902-1969; Lois Smokey, 1907-1981; and Monroe Tsatoke, 1904-1937.

Pochoir is a method of making prints used in the late 19th and early 20th centuries. It's a stencil-based technique done by hand that is extremely time consuming but results in unique one-of-a-kind pieces that have vivid color and a painterly texture.

"Apache Man," serves as a fine example of the pochoir style preferred by Mopope and his peers. The image is number 18 from a portfolio of pochoir prints of drawings by the Kiowa Five. It is a Native man, pictured in profile, wearing ceremonial attire. The details of his clothing and headdress were the artist's primary focus, and he handled them with admirable accuracy. His colors are of the same strength as his paintings, though the different method of applying paint to paper creates a different result. Here, the colors are applied in a totally uniform fashion, spread out smoothly and evenly. Mopope's "Apache Man" is a strong pochoir print from one of the most significant Kiowa artists.

Stephen Mopope (1898-1974) Qued Koi - Painted Robe was a painter who was a member of this group of important early twentieth century Kiowa artists. Like the "Flat-Style" or "Studio Style" paintings being created by Pueblo Indian painters, the works of the Kiowa artists focused on the everyday life of the Indian: religious ceremonies, everyday rituals, and everything in between. Like the Pueblo painters, their works are mostly two-dimensional and contain minimal backgrounds. The Indian's environment is mostly ignored in favor of detailed portrayals of the Indian himself.

J.J. Brody's book Kiowa & Pueblo Art - Watercolor Paintings by Native American Artists states that, aside from the influence of the aforementioned Kiowa art forms, exactly how this style came to be is unknown: "No new art happens in a visual vacuum, so what earlier sources stimulated development of what came to be known as the ‘Kiowa' or ‘Oklahoma' style Indian painting? Pueblo Indian paintings on paper of the early 20th century seem to be the only likely Indian source, but, there are few similarities except for the many Pueblo pictures of realistically illusionistic figures who are shown operating within a void. In any case, it is clear that by 1928, influence was flowing mostly from Oklahoma westward. We are left with the realization that the Kiowa paintings neatly match many stylistic attributes of the contemporaneous international decorative art style known as Art Moderne or Art Deco. That style dominated the popular art of the 20s and 30s, including magazine art, and it surely reached rural Oklahoma by the mid-1920s. But, it is axiomatic that correlation is not causation, and the fact remains that we still do not know why this distinctive tradition looks the way it does."

Provenance: from the estate of a large collection of a New York resident