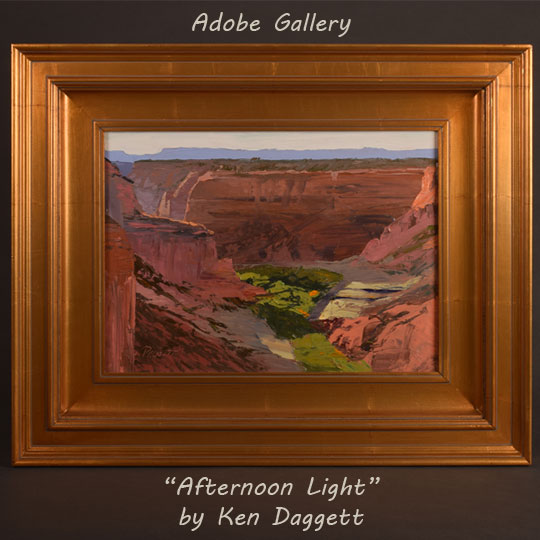 Ken Daggett’s “Afternoon Light” is an original oil painting completed on a canvas panel.  The painting uses a blend of pinks and purples to create the textures of distant hillsides and rock walls.  Additional colors appear, adding depth and drama to the scene.  Strokes of green in the shadowed areas signify plant life in a distanced, abstracted way.  Across the canyon in the sunlit areas, bright white and bold blue appear.

The canyon’s two walls are divided by a fertile green floor, which ultimately curves behind a rock formation and out of sight.  The mountains and mesas in the distance are represented by a band of pastel purple with subtle peaks and valleys.  Above this, a band of white with hints of blue creates a beautiful clear sky.  The image as a whole feels dreamy and beautiful, and Daggett’s color palette—pink and purple, mostly, with splashes of bolder tones throughout—adds a burst of energy without going so far as to feel unrealistic.  “Afternoon Light” is a bright and appealing Southwestern scene.

The painting is numbered and titled 3276 Afternoon Light on verso.  It is signed Ken Daggett in lower left.  It is framed in a carved gold frame.

Western artist Ken Daggett is a painter who grew up in Southern California and now lives in New Mexico.  Daggett’s early artistic explorations were inspired by those of his grandmother.  He studied art in high school courses and at Orange Coast College, but ultimately favored teaching himself over formal education.  He mastered watercolors while working as a freelance architectural illustrator, and then switched to oils while exploring plein air painting.  He lives and works in New Mexico, prolifically creating southwest landscape paintings.

Provenance: this Original Oil Painting titled "Afternoon Light" by Ken Daggett is from the artist