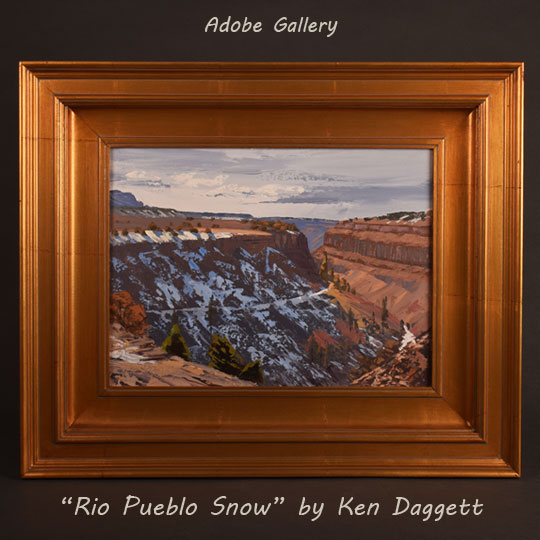 "Rio Pueblo Snow" is an original oil painting by New Mexico artist Ken Daggett. With this image, Daggett places the viewer at the edge of a cliff, staring across a massive canyon. In the foreground, we see a few trees perched right near the edge, and just a touch of the land upon which the viewer might stand. Beyond this, the canyon opens up and winds through the Northern New Mexican desert.

A shadowed wall of rock—covered in the remnants of a snowstorm and split in half by a pathway carved into the hillside—faces the viewer.  On the opposite side of the canyon, sunlight has arrived, and there is no remaining snow to be seen.  Above all this earth is a dramatic sky made of a wonderful blend of icy whites and grays.  Desert dwellers know the feeling that this painting captures—a storm has arrived out of nowhere and passed just as quickly, leaving a trail only in the areas that are untouched by sunlight.  One can almost feel the cold, crisp air while viewing Daggett’s painting.

The painting is signed “Ken Daggett” in lower left and framed in a carved gold frame.  It is numbered and titled “#3265 Rio Pueblo Snow” on verso.

Western artist Ken Daggett is a painter who grew up in Southern California and now lives in New Mexico.  Daggett’s early artistic explorations were inspired by those of his grandmother.  He studied art in high school courses and at Orange Coast College, but ultimately favored teaching himself over formal education.  He mastered watercolors while working as a freelance architectural illustrator, and then switched to oils while exploring plein air painting.  He lives and works in New Mexico, prolifically creating southwest landscape paintings.