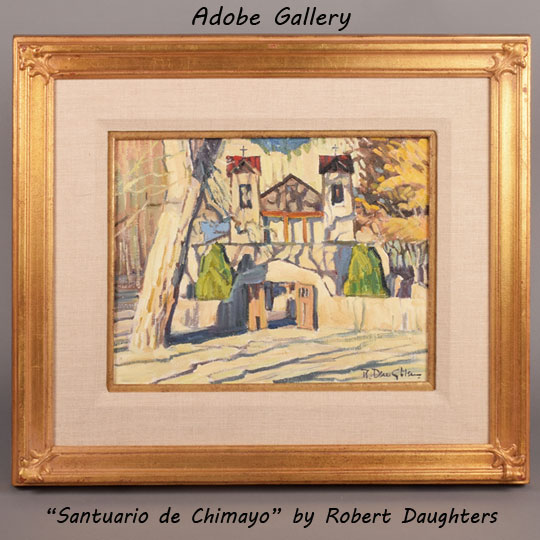 “Santuario de Chimayo” is an original oil painting by New Mexico artist Robert Daughters.  Many will recognize this as the Chimayo, New Mexico church to which hundreds of thousands of people make pilgrimages each year.  The majority of these visitors come during “Holy Week” preceding Easter, seeking blessings and fulfilling vows.  These pilgrimages are traditionally made on foot, with visitors walking from nearby towns along the shoulders of the highways.  Daughters’ “Santuario de Chimayo” is a fine tribute to these spiritual seekers’ destination.

In this image, the viewer looks directly at the front of the church, through the open courtyard gates. This perspective allows for a fairly straightforward composition, which is elevated into something extraordinary by the artist’s use of light and color.  The church is bathed in the warm glow of early evening sunlight. Shadows from nearby trees extend across the painting diagonally, covering the church with winding, jagged-edged lines in blue and purple.  The church’s parallel lines, right angles, and consistent colors stand in stark contrast to the surrounding trees’ wild expressions of shape, shadow, and color.  What’s most remarkable, though, is the way these two worlds come together to create such a beautifully dreamy image.  Daughters’ work with “Santuario de Chimayo” is exceptional.

The painting is signed R. Daughters in lower right.  It is framed in a carved gold frame, under a fabric mat with a gold interior band.

Artist Image Source: Public Domain, may be subject to copyright.