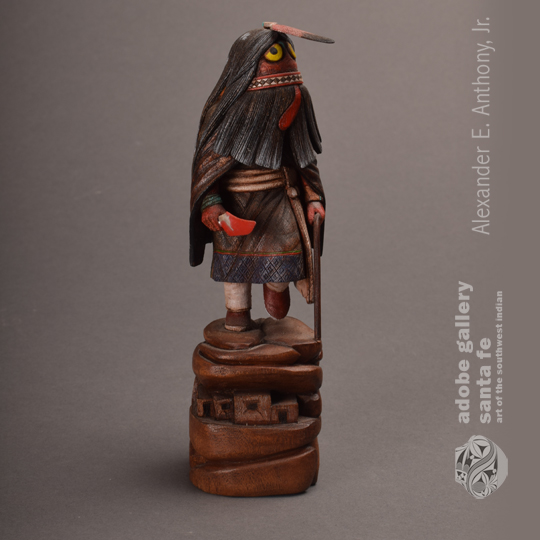 This small version of Soyok Wuhti, the dreaded Ogre Woman of Hopi, was carved by Lester Quanimptewa in 1997, at which time we purchased it from the artist.  It is an all-wood single piece carving with the exception of the lone feather on the head and the items in her hands.  The artist achieved an amazing amount of detail in such a small figure.  The katsina stands 3-3/4” tall and the pedestal is another 2 inches.  The folds in the cape and skirt depict the motion of the doll while walking and her beard swings with the gait of her steps.  The hair of her beard is displayed hair by hair and the fringe on her white belt shows the weave of a fabric.

Overall, this is a masterpiece carving of a beautiful figure.  The artist signed his name on the side of the pedestal.  Lester Quanimptewa was born in 1962 and has been carving katsina dolls since 1978.

"The awesome figure of the Monster Woman appears during the Powamu ceremony as one of the many Soyoko who threaten the lives of the children. Dressed all in black, with long straggling hair, starring eyes and a wide-fanged mouth, she carries a blood-stained knife and a long jangling crook-a truly fearsome creature to the children.

"When she speaks, it is in a wailing falsetto or with a long dismal hoot of ‘Soyokό-u-u-u.' from which her name is derived. She may reach for the children with the long crook and threaten to put them in the basket on her back, or to cut off their heads with the large knife that she carries in her hand utterly terrifying her young audience.

"On some mesas she may be the ogre that threatens a small child who has been naughty and bargains with a relative to ransom the child, but on others she is not. In some villages she leads the procession of ogres; in others she remains at the side, content to make threatening gestures."

Provenance: Purchased by Adobe Gallery in 1997 from the artist and then sold to a client in New York from whom we now have it back for re-sale.