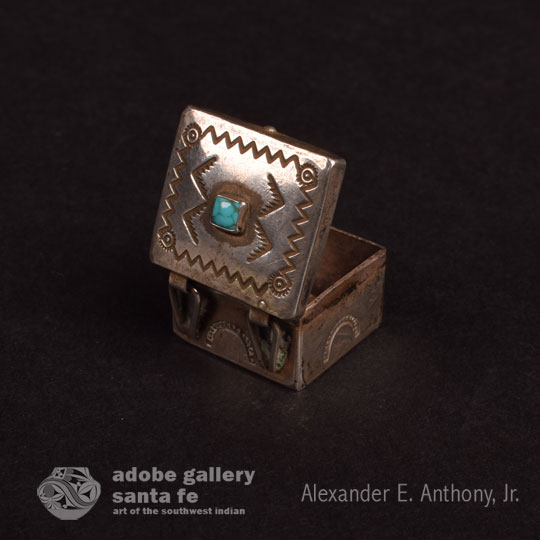 Silver boxes are not made today as frequently as in the mid twentieth century as more elaborate silver items have become more popular and more financially rewarding to the artist.  Silver boxes are basically a thing of the past and are now very collectible.

This is a charming and very small silver lidded box—one of the smallest we have seen.  It is almost square—off by only 1/16th of an inch. Even with such limited side wall space, the artisan found room to apply stamped designs.  All four walls of the box have a simple arched design. The lid has a simple but very balanced design stamped into the silver. At the center of the lid is a square-cut turquoise gemstone with a beautiful copper matrix.  The lid is attached with handmade hinges.

Most attention has always been placed on decorating the lid as that is the most visible part of a box.  They have been decorated with a variety of stamped designs, but always with hozho as the basic idea.  The stamps used were the same as those used on conchos, jewelry, bridles and other silver objects of the Diné.

Diné silversmithing only got its start in the mid-1800s, probably while the Diné were captive at Bosque Redondo in southern New Mexico.  By the early 1900s, however, it had developed into a source of income for many families and items that would appeal to tourists and other non-Indians were being made.  Indian traders and merchants were influential in introducing silver object ideas to the Dine, such as candlesticks, boxes, trays, tableware and other non-Native items. This was very successful and has continued to today.

Provenance: from the collection of a gentleman from Washington, D.C.

- Navajo and Pueblo Jewelry and Metalwork 1880-1950 by Robert Bauver

- Masterworks and Eccentricities: The Druckman Collection

- Beesh Ligaii In Balance: The Besser Collection Of Navajo And Pueblo Silverwork by John Torres-Nez