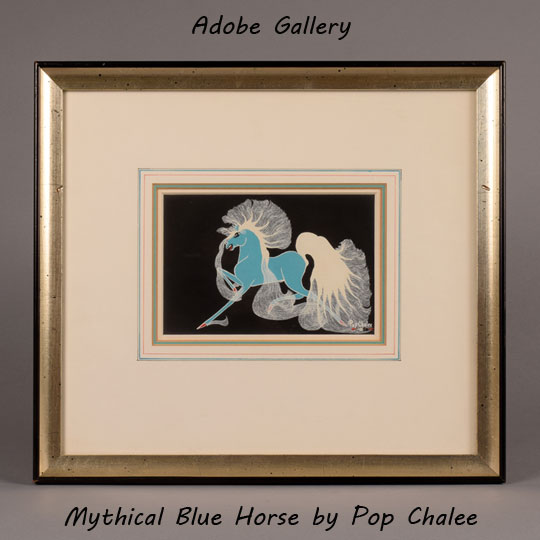 Taos Pueblo artist Pop Chalee is famous for images of the blue mystical horse.  It is inconceivable that she could draw all the white lines of the mane and tail and place them so close together.  The horse has a happy expression on its face.  The image was painted on black paper.  It is framed with triple matting and drawn outlines on the top mat.  It is framed with a black frame that has a silver interior border.

Merina Lujan (1906-1993) Pop Chalee - Blue Flower was born in Castle Rock, Utah, of a Taos Pueblo father and an East Indian Mother. She spent most of her adult life away from Taos Pueblo, most of it in Santa Fe, New Mexico. She long ago developed a unique style of painting which combines Asian and American Indian motifs. Accused of painting in the "Bambi Style" she explained that it was the other way around-[Walt] Disney Studios painted in her style. At one time Walt Disney visited Santa Fe and unsuccessfully tried to recruit Indian painters to work in his studio. Before returning to California, he purchased one of her forest scenes. It was her belief that one of her deer was the inspiration for Bambi. (Seymour 1988).

The legend of the Mythical Horse as dictated by Pop Chalee:

“Before the Spaniards came, the Indians had no means of transportation except for huge, beautiful dogs they used for carrying and packing.

“When the Spaniards came, they brought with them their beautiful Arabian horses.  All forms of life are sacred to the Indians, and these beautiful horses became especially sacred not only because of their beauty but because they were so swift and tireless.  The Indians could now travel great distances, they could have larger hunts and faster hunting.  With the horses, however, also came wars between tribes and stealing of horses and treachery.

“In Taos, the Indians were proud of an especially beautiful Arabian stallion.  This horse sired many beautiful colts and brought happiness and prosperity to the pueblo.  When he died, the Indians felt that the spirit of such a noble animal could not die.  And sure enough, a Mythical Horse began to ride through the Pueblo at night.  He appears with the evening star, and his gorgeous tail and mane sweep out in the night wind.  With the coming of the morning star, he leaves.  This legend is told during the winter nights to the children, and they believe that they can hear him at night as he rides and watches protectively over his pueblo people.”

Provenance:  this Original Painting of a Mythical Blue Horse by Pop Chalee is from the collection of a gentleman from Dallas, Texas The World of Flower Blue [SOLD]
by Margaret Cesa