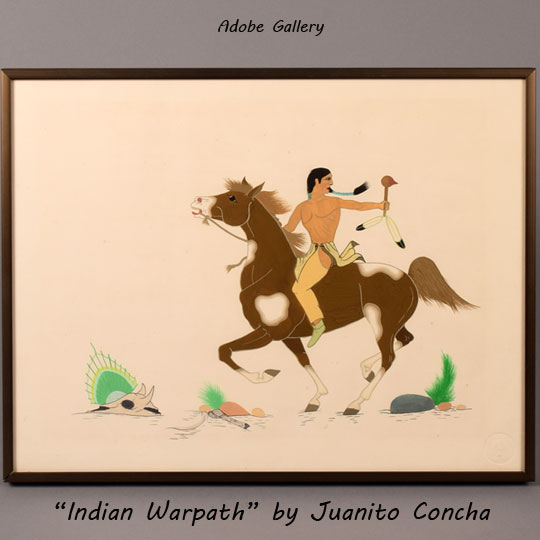 This original painting was created by Taos Pueblo artist Juanito Concha, most likely in the 1940s. The painting features a Native warrior on horseback. As his horse runs through the desert, the warrior looks back over his left shoulder and raises a stone club into the air. Rocks, plants, a skull, and a broken bone appear on the ground below.

We’ve only seen one other piece by Concha, and it was similar to this one in that it felt like a unique execution of the traditional Indian School style.  This piece adds subtle natural elements and a bit more dimension and depth than we’d see in an earlier traditional painting, and these additions work well. Concha’s figures are full of warmth and character, with compelling faces and muscular bodies that are full of life and energy. This is a unique and attractive pueblo painting.

The painting is not signed. The artist and provenance are identified on a piece of paper attached to the backing. The title “Indian Warpath” is written in pencil on the back of the painting.  The painting was executed on Strathmore paper.

Juanito (John) Concha (1873 - 1973) was a Taos Pueblo painter.  Little has been published regarding Concha’s life and work, but he is included in Jeanne O. Snodgrass’ American Indian Painters A Biographical Directory, which notes that Concha exhibited and placed works in a few public collections.  According to Snodgrass, “the artist was still painting in 1950, although his work was not readily available to the public.”

Condition: good condition with some foxing

Provenance: this Original Taos Pueblo Painting "Indian Warpath" by Juanito Concha is from a private New Mexico collection, previously in the large painting collection of James Bialac of Phoenix, Arizona