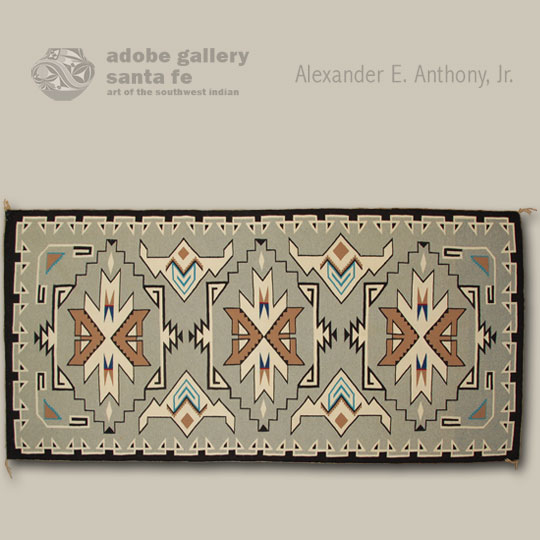 Navajo rugs from the Teec Nos Pos area of the Navajo Reservation are considered the most beautiful designed rugs of all and, at the same time, considered the least Navajo of all.  The designs have been influenced by early traders at the trading post providing designs of Persian rugs to the weavers and, in one instance, painting such designs on the exterior walls of the trading post in the hopes that the weavers would copy those designs.

Teec Nos Pos (circle of cottonwoods) Trading Post was established in 1905 by Hambleton (Hamp) Bridger Noel, the first white man who was able to win the approval of the local Navajo to set up a trading post on their land.  Ten years earlier, two potential traders were driven off.  Hamp Noel married Eva Foutz in 1911 and eventually the Foutz family took over the post and still operate it today.

Teec Nos Pos rugs generally have large geometric figures arranged on a central rectangular plane.  Before the 1940s, almost all the wool used for warp and weft was handspun and hand dyed.  After World War II, the weavers began to use commercial 4-ply wool and then 3-ply Germantown wool in small amounts as filler elements.  The trading post stocked these commercial yarns in vibrant colors desired by the weavers.

This Navajo textile follows the traditions of Teec Nos Pos in design and use of many colors.  The center field is comprised of a commercial yarn grey background. There are three main design elements down the center of the textile and two triangular design elements on either side.  Each of the three central elements is enclosed in an outline black stepped design.  Yarn colors of brown, black, turquoise, red and white are used as accent designs.

“Regarded as aberrant to the mainstream of Navajo designed development by scholars and collectors through the first several decades of this (past) century, all Teec Nos Pos rugs, since the early 1980s, have surpassed even the famous Two Grey Hills in both price and demand, and are the most popular of the regional rugs.” Tyrone Campbell

“According to Gilbert Maxwell, the Teec Nos Pos rugs reserve their greatest appeal for the serious collector and could be the classic weaving of the 20th century.”

Condition: The textile has just been professionally cleaned.  Overall, it is in very good condition.  The turquoise color is brighter on one side of the textile than on the other.

Provenance: from a gentleman from Colorado 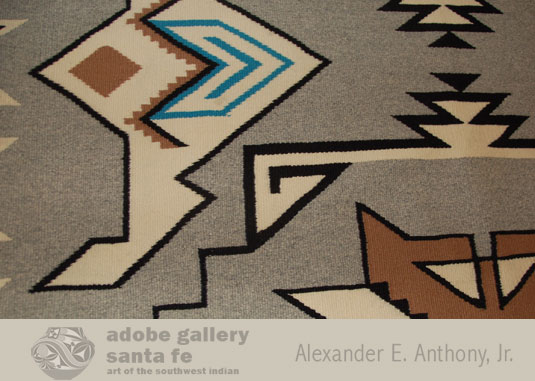 Tension and Harmony - The Navajo Rug
by Artisan Unknown

Weaving a World: Textiles and the Navajo Way of Seeing [SOLD]
by Roseann Willink and Paul Zolbrod

Jewels of the Navajo Loom: The Rugs of the Teec Nos Pos [SOLD]
by Ruth Belikove