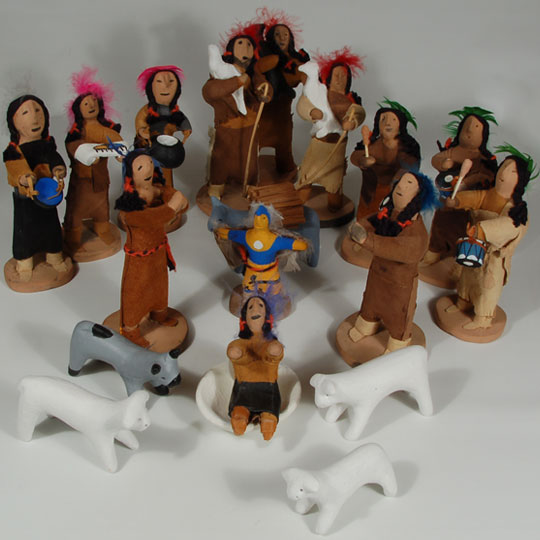 Manuel Vigil is probably the best-known potter of the 20th century from Tesuque Pueblo. He learned to make pottery by the age of seven by watching his mother make pottery. He specialized throughout his career in making figurine pieces. He is credited with being the first Native Puebloan to make Nacimientos (Nativity sets). Pueblo dance figures were a favorite of his. Later, he made storyteller figurines.

Following an accident in 1948, when a hit-and-run driver ran over him, Manuel lost one leg to amputation. His wife, Vicenta, encouraged him to get back into arts and crafts while he recuperated. He and Vicenta started making pottery together. He would make figurines of pueblo dancers and she would paint them and even make clothing for them. They continued this collaborative effort throughout the remainder of his life.

According to the Monthans in their book Nacimientos, Manuel made his first nativity set in 1959 making him the first Southwest Indian artisan to do so.

Manuel and Vicenta made a variety of styles of nacimientos.  One style they referred to as their Colonial style in which they featured painted costumes of early Spanish colonists.  Another Colonial style featured clothing made by Vicenta.  There was a Pueblo style where the figures were painted in bright acrylic colors.  They made a totally micaceous style devoid of any paint or clothing.  Lastly, they made a nacimiento where the figures were dressed as Plains Indians as in this set.  Vicenta dressed each of the figures in buckskin clothing.

This set comprises 19 individual pieces.  There is the Holy Family, three Wise Men, three shepherds, three drummers, an Eagle Dancer and five animals.  The humans are dressed in buckskin and feathers and the animals are painted.  The set was originally purchased in 1985.

Provenance: from the collection of a family from Kansas