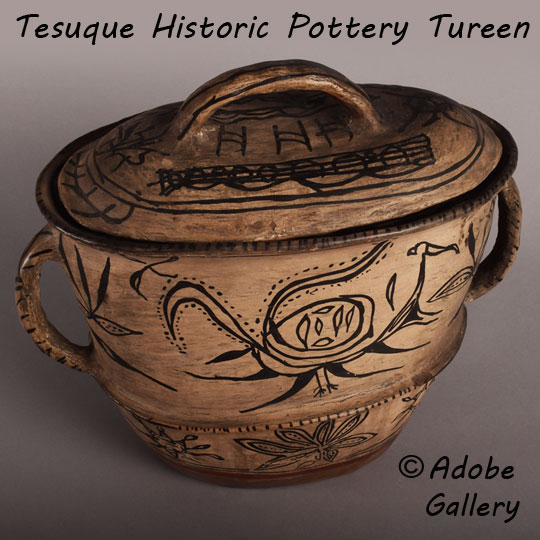 The most appropriate name for this unique vessel would be tureen, of the style of a Victorian serving dish for foods such as soups or stews. Tureens were shaped as broad, deep, oval vessels with fixed handles and low domed covers with a knob or handle.

Why would a potter at Tesuque Pueblo make such an unusual vessel shape?  The answer is certainly that it was requested by a Santa Fe merchant who wanted something unusual for his curio store.  Potters at Tesuque were the most likely ones to make something as unusual as this.

Aaron Gold had a shop on East San Francisco Street and Burro Alley in Santa Fe as early as 1880.  Gold advertised his store as an important one for pueblo pottery.  He advertised that it “was ‘the only place in town where Rare Specimens of Indian Pottery, ancient and modern,’ could be had.” [Batkin, 2008:23].  Surely a merchant like Gold would have ordered this vessel from a potter at Tesuque for the purpose of having it available for a traveler on the newly arrived train to New Mexico filled with curious visitors.

Jake Gold, younger brother of Aaron, also had a curio shop on East San Francisco Street specializing in pueblo pottery and other Indian items.  Eventually he not only ran his own curio shop, but he also managed Aaron’s shop.  It is quite likely that Jake Gold was the instigator for the creation of unusual pottery items by Tesuque Pueblo potters.

Potters at Tesuque Pueblo were not only located closest to Santa Fe, they were the most amenable to adapting to a store owner’s requests.  They were the ones who made Tesuque Rain Gods, likely at the request of Jake Gold. Rain gods did not exist in Tesuque’s traditional culture—they were invented for commercial purposes, made in large quantities, and marketed creatively as sacred items. Today’s collectors are usually aware of the Rain God figurines’ origins. We appreciate the efforts of those enterprising early traders, as they led to the creation of many unique pieces.

This piece is a magnificent example of the finest work by a potter venturing out from her trained methods of making traditionally shaped vessels.  It is wider in length than in width, providing two surfaces of immense size for displaying the strong designs. The lower section of the vessel resembles a bowl with a rolled-out rim. On top of the bowl was added the upper section that contains a pair of handles. A lid with a handle makes a rare appearance atop this piece, resting comfortably within an interior rim.

The potter used all the available space for painting her outstanding designs.  On one side of the vessel, there is a large and beautiful bird with an elaborate tail and wings.  The bird’s head is small, with an extended beak. Flowers were provided in front and back of the bird.  Below the bird are individual designs resembling flowers. On the opposite side, the design appears to be a ladder at the entrance of a kiva, below which is a long vine ending with a flower design.

The potter adorned the lid with what we’d interpret as a spirited depiction of a vigorous storm. Rain clouds, lightning bolts and a variety of lively designs tangle with one another as they circle the lid, forming a wonderful display that feels appropriately free flowing. Those who are familiar with historic Tesuque pottery will recognize that each design element on this piece was executed in an entirely unique manner—most of the individual elements are familiar, but the style in which they were painted is quite unique. These designs are wild and expressive, but they manage to convey that energy without sacrificing beauty and elegance.

Those who appreciate rarity will find much to appreciate here, and few will argue with our assertion that the gorgeously expressive designs are phenomenal. This unknown Tesuque potter’s subtle experimentation was a great success, resulting in a unique piece that is exceptional in both form and design.

Condition: Very good condition with a minor chip on the bowl rim extension at mid body. Blacklight examination reveals no restoration or repair.

Provenance: this VERY RARE and Unusual Tesuque Pueblo Historic Pottery Tureen is from the collection of a gentleman from Santa Fe