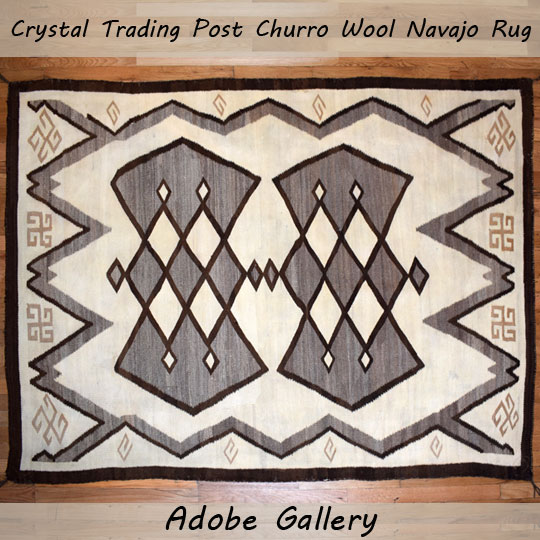 This Navajo floor rug from the first decade of the twentieth century was woven from the wool of a Churro sheep.  It has the feeling of a cashmere weaving.  The background is white and the designs are in shades of brown.  There are two major batwing designs in the interior which are outlined in a zigzag carded brown border framed in a dark brown inch-wide line.  Snuggled between the borders are a variety of designs that float on the white wool.

This rug is typical of those made at Crystal Trading Post around 1910.  The Indian trader at the post at that time was the famous J. B. Moore.  He was responsible for encouraging the weavers to make the finest textiles using the finest wool.  He had published a mail order catalog of Navajo rugs in 1903 to enhance sales of the weaver’s works with buyer’s in the eastern states who had an Indian room in their Victorian homes.  Later, in 1911, he published a larger mail order catalog for the same purpose.

J. B. Moore was a native of Sheridan, Wyoming.  He bought an interest in the trading post at Washington Pass, N.M. in 1896, a remote and isolated area from a main commercial area.  The post was there because there were a large number of Navajo living in those mountains.  There had been traders in the region from as early as 1878 but they mostly set up in tents in the summer and departed before winter.  J. B. Moore bought out the remaining share of the post before the end of the year, and named it Crystal Trading Post.  He built a sturdy log post and house and freighted in enough supplies to last the winter.  The elevation of Washington Pass is about 8,000 feet and there is a great deal of snow on the ground much of the year, making it impossible to freight in supplies, probably explaining why there had been a rapid succession of traders.

The remoteness of the Crystal area and the fact that winter business was limited led Moore to issue the mail order catalog, a newly developed American merchandising technique popularized by Sears, Roebuck, and Montgomery Ward.

One should not overlook Moore’s respect for the women who wove his rugs.  He is the first merchant to mention the women by name and even to show their pictures.  In his personalization of Navajo weaving, Moore was far ahead of his time, for only in the last five or ten years have traders once again begun to identify their weavers by name and to attach Polaroid photos to rugs they sell.

Moore was one of the great pioneers in the field of Navajo weaving and was instrumental in changing it from blankets to rugs.  He, along with other traders of the late nineteenth and early twentieth centuries, saw that the future of weaving lay with adapting to the changes in Anglo taste, adaptations that are still being carried on by weavers and traders working together.

Condition: good condition and just professionally washed.  Some repairs to the edges.

Provenance: this Crystal Trading Post Churro Wool Navajo Rug is from a resident of Albuquerque