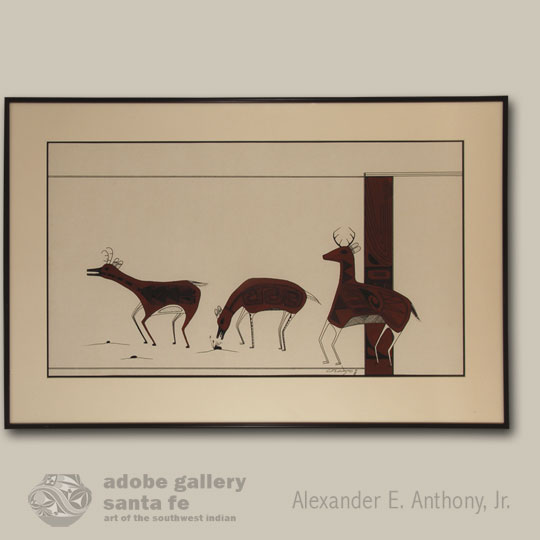 Kewa Pueblo (Santo Domingo) is known mostly for its fine heishi jewelry and beautiful pottery. There are few painters from the Pueblo. Charles Lovato is probably the finest and most recognized painter from Kewa. He was a poet and a jeweler as well as a painter.

Lovato’s paintings are a modern testimony to his pueblo ancestors. His work is uniquely abstract. In this painting of three deer grazing, he has placed ancient pottery designs within each deer. It is no surprise that Lovato incorporated pottery designs into his work, as he was raised by his grandmother, Monica Silva, who was considered to be one of the most talented potters at Kewa.

Clara Lee Tanner states that Lovato was one of the few, and only, painter from the pueblo to be productive as an artist.  She credits the lack of painters to the pueblo being the most conservative of all New Mexico Pueblos and, as a result, painters have not documented ceremonial functions from there.  Lovato’s paintings are of subjects not related to ceremonial functions, but of animals and portraits, by which the pueblo could not be offended.

Tanner also states that “a few drawings by children from Santo Domingo, all of early date, were in the Indian School collection at Santa Fe.  Several dealt with realistic subjects, mainly horses, while others were concerned with highly stylized trees, corn plants, and birds.”  By the 1970s, Lovato was the only recognized painter from the pueblo.

Condition: It is signed in lower right, dated 1971 and is in excellent condition.

Provenance: The painting is from a collector from Oklahoma.