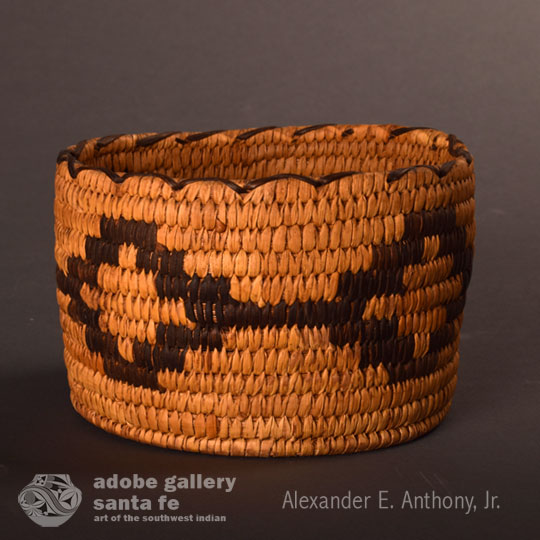 This Tohono O'odham cylindrical basket is one probably made in the pre-World War II period, to be sold to the tourist market.  It is too small to serve a function in a Native home.  The basket has a rich warm patina which attests to its age.  It has a design of stepped squares hooked to adjoining ones in chain-like manner.  The yucca is wrapped over a grass bundle and the design is made from the wild plant, Devil’s Claw.

The Tohono O’odham are a Native American people of the Sonoran Desert, residing primarily in the state of Arizona and the Mexican state of Sonora. Tohono O’odham means "Desert People." The federally recognized tribe is known as the Tohono O'odham Nation.

The Tohono O’odham have rejected the former name Papago, used by Europeans after being adopted by Spanish conquistadores from hearing other Piman bands call them Ba:bawĭkoʼa. The Pima (Akimel O’odham) were competitors and referred to the people as Ba:bawĭkoʼa, meaning "eating tepary beans." That word was pronounced Papago by the Spanish and adopted by later English speakers.  The Tohono O´odham weavers of Arizona made baskets very much like those of the Pima - Akimel O’odham River People of the same area.  Both tribes used willow and both used martynia - or devil’s claw - for a decorative material.  It seems that the Tohono O´odham produced many more shapes than did the Akimel O´odham.

Condition: this Papago Cylindrical Basket from the Tohono O'odham Nation is in very good condition

Provenance: from the estate of a former client from New York