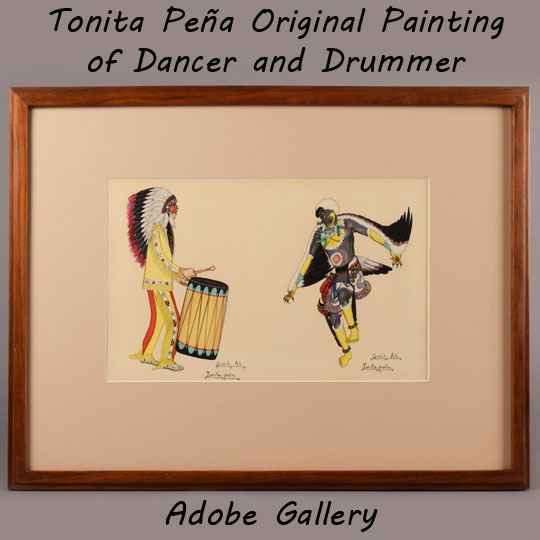 This original painting was created by San Ildefonso Pueblo artist Tonita Peña. It might be more accurate to refer to this listing as two original paintings, though—two dancers appear, with a signature below each, suggesting to us that Peña created two separate images but never cut the paper. Perhaps she planned two single-figure paintings, found the figures to make an appealing pair, and decided against separating them. The two dancers do look great together, so we’d never consider modifying this beautiful and unusual piece.

On the right side, Peña created an Eagle Dancer. He performs his dance with closed eyes and outstretched arms. He faces the viewer, not quite directly but enough so to allow a look at the intricacies of his dance regalia.  Peña’s work here is deep and detailed; a close study will reveal strong textural work and skillful shading. On the left, a drummer appears. He’s depicted in profile, which turns him directly toward the dancer. The drummer, like the dancer, was made with exceptional detail and strong color. He makes his contribution to the dance with a similar intensity, which makes these two an excellent pair. Peña’s figures are always rich in character, but these two are particularly strong examples.

The painting is framed in a carved wood frame with a tan mat.  It is twice signed Quah Ah, Tonita Peña.

Tonita Peña (1893-1949) Quah Ah was born in the small New Mexico pueblo of San Ildefonso, New Mexico.  The pueblo is located on the Rio Grande, just north of Santa Fe. When Peña was just twelve years old, her mother passed away. Her father, unable to raise her while tending to his responsibilities at the pueblo, took her to live with her aunt and uncle at Cochiti Pueblo.  This was where she would spend the remainder of her life. Peña was the only woman in the group of talented early pueblo artists referred to as The San Ildefonso Self-Taught Group, which included such noted artists as Julian Martinez, Alfonso Roybal, Abel Sanchez, Crescencio Martinez, and Encarnación Peña.  These artists were the earliest known pueblo painters. Today, their works are highly collectible because of both historical significance and quality.

Provenance: this Tonita Peña Original Painting of Dancer and Drummer is from a private Santa Fe collection