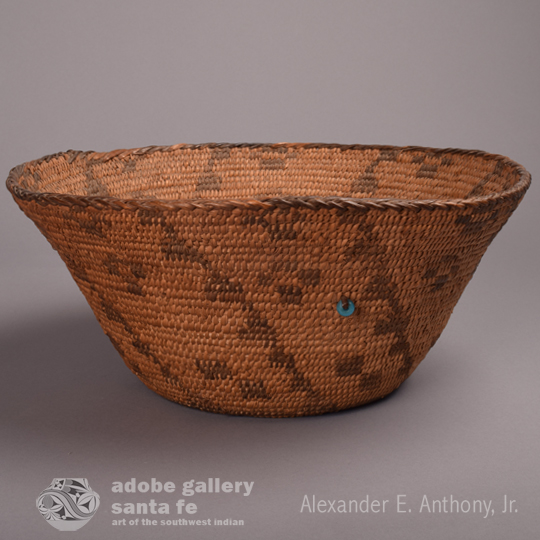 It was documented around 1900 that basket making was practiced in nearly every Pima home.  Twenty years later it was stated that not one out of ten women could weave a creditable basket.  In that 20 years, commercial utilitarian vessels became available so it is not unexpected that they would replace hand-woven baskets for home use.  Since collectors and tourists were only willing to pay one to two dollars for a basket, the women realized that it was not worth their time to make them any longer.  They could earn that per hour doing field work.

A basket of this style was used for hauling small items, perhaps seeds or berries during gathering season, or other editable items.  The addition of a single padre bead to the side of the basket was likely a talisman for success in the gathering process.

Padre beads are blue trade beads originally imported to the Americas by Spanish Missionaries, Friars, Monks and traders who used them as currency.  The O’odham tribes seemed to have found them fascinating enough to add to their basketry, sometimes every inch around the rim and other times, like this basket, a single one on the side.  It is quite likely that this basket dates to as early as the 1920s.

Condition: this Traditional Akimel O'odham - Pima Basket with Padre Bead is in good condition with no significant damage.

Provenance: from the estate of a former client from New York