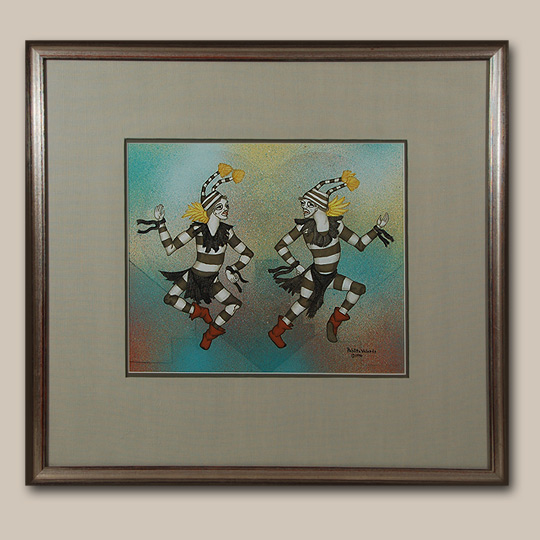 Pablita Velarde was from Santa Clara Pueblo and was able to accurately portray cultural life events.  As in this example, during a ceremonial plaza dance, the Koosa are not clowns and are not intended to amuse. They represent the spirits of the ancestors or Ancients of the people, those who have direct influence with the gods. During such dances, the Koosa dance with the performers but are not to be seen as they are supposedly invisible.

During a dance ceremony there is nothing but the utmost seriousness by the Koosa.  There is no clowning at any time.  Clowning, such as chasing the children and making advances to the women, is indulged outside the dance.

The Koosa’s body is bare, painted in grey stripes.  His hair is tied in tuffs of dried corn husks and matted in clay of a grayish color.  He wears a black loincloth and tan moccasins, and nothing else.

The painting by Pablita Velarde (1918-2006) Tse Tsan - Golden Dawn is signed in lower right and dated 1990.  It is properly matted and framed in a wood frame.

Condition: this Painting of Two Santa Clara Pueblo Koosa Clowns by Pablita Velarde appears to be in original condition but has not been examined out of the frame

Provenance: from the personal collection of a Santa Fe family 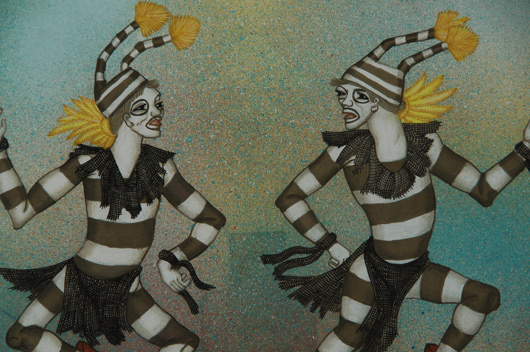