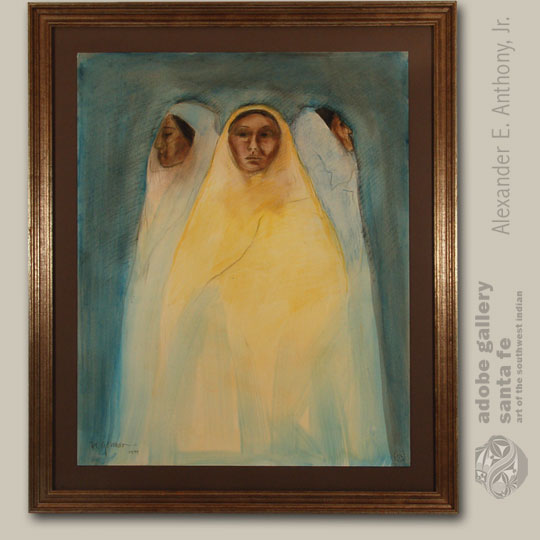 R. C. Gorman became one of the most famous and accomplished Native American artists of his time. His paintings, drawings and lithographs are included and displayed in prominent public and private collections around the world.

Diné artist R. C. Gorman created this untitled oil pastel in 1974. It’s a gentle, accessible image, simple in its basic, nearly symmetrical composition but incredibly complex in its execution. Gorman’s subjects are three robed figures, arranged into a triangle with backs turned in towards one another. One of them, wearing a soft yellow robe, faces the viewer directly.  The other two, positioned back to back and wearing gorgeous light blue robes, are seen in profile. The figures’ faces—sensitively rendered, as per Gorman’s usual—are delicate and beautiful. The colors, particularly the combinations of blue and black pastels used for the background, are rich, lush and inviting. It’s at once subtle and powerful, and illustrates exactly why Gorman is so highly regarded by collectors of Native art. The piece is signed and dated 1974 in its lower right corner.  It is mounted and framed tastefully, with its edges exposed.

Rudolph Carl Gorman (1932-2005) was a successful, influential and famous artist from the Navajo Nation.  Gorman was born in Chinle, Arizona, and grew up in a traditional Navajo hogan. His father, Carl Nelson Gorman, was a painter and art educator who served in World War II alongside a handful of other notable Navajo artists.  Gorman began drawing and painting at a young age. He served in the U.S. Navy after finishing high school. After completing his military duties, he studied literature and art at Northern Arizona University.

In 1958, a Navajo Tribal Council scholarship sent him to study at Mexico City College.  During this period, he was exposed to a variety of new influences—Diego Rivera, Francisco Zuñiga, and Rufino Tamayo, most notably—and explored new mediums.  It was during this period that he studied stone lithography under the tutelage of master printer Jose Sanchez. After returning from this enlightening and productive journey to Mexico, he studied art at San Francisco State University. He then moved back to New Mexico—to Taos, this time—where he opened the R.C. Gorman Navajo Gallery. Founded in 1968, it was the first Native-owned art gallery in Taos.

Gorman was the only living artist whose works were included in the Metropolitan Museum of Art’s “Masterworks of the American Indian" exhibit.  He was highlighted in a PBS television series about American Indian artists, alongside other groundbreaking Native artists Helen Hardin, Fritz Scholder, Joseph Lonewolf and Charles Loloma.  Gorman passed away in 2005 in Albuquerque, New Mexico.

Provenance: from the collection of a Washington resident who purchased it in January 1975 from Art Wagon Galleries in Scottsdale, Arizona