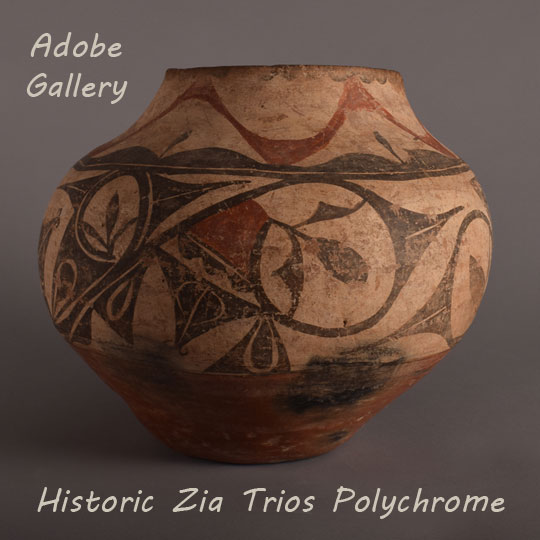 James Stevenson visited Zia Pueblo in 1880 on an anthropological mission and to collect Pueblo pottery.  He collected very few ceramics at that time. But, in 1887, he and his wife, Matilda Coxe Stevenson, returned and collected significantly more pottery.  Apparently, they missed this old jar which we believe dates to the 1850s.

The vessel shape of jars in the Trios Polychrome period are globular, that is, they are rounder than later jars of the Zia Polychrome period.  This jar is certainly globular in shape. The scrolls containing trefoils is one of the earliest decorations on Trios Polychrome (1820-1860) pottery.  The red zigzag line at the neck first appeared as black in the beginning of the Trios period, then began to be executed in red. There was minimal red used in the decorations in this early period.

This jar has a tilt resulting in the rim being 10-½ inches high on one side and 11-¼ inches on the opposite side.  It is quite likely that this occurred during construction of the jar.

The result is something specific to take in— a functional object from so long ago that manages to steal one's attention and hold it in the now with all of the intricacies of its appearance. This jar appears somehow both rough and smooth, with a wonderfully complex texture. There is a roughness to its rim but the vessel smooths as it reaches downward and outward, expanding at its globulous center. The mid band holds much of the decorations and features swirling geometrics in dark brown and red. Two thin dark brown lines form the bottom edge of the mid band; below this, the jar is painted in dark red that is only interrupted by fire clouds and patina from use over time.

Condition: this Zia Pueblo Very Large Historic Trios Polychrome Pottery Jar has a vertical crack from the rim to near the base on one side.  The crack has been stabilized but not concealed.

Provenance: from the estate of a family from Los Alamos, New Mexico, who purchased it from Francis Harlow of Los Alamos decades ago.

Reference and Recommended Reading: The Pottery of Zia Pueblo by Harlow and Lanmon