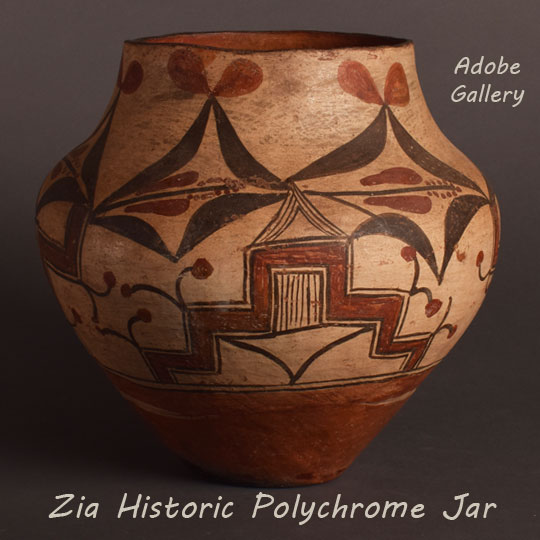 When viewing the stepped design on this Zia Pueblo Historic Polychrome Pottery Water Jar, one is tempted to say that it resembles the Santa Ana Pueblo Eiffel Tower design element but it is a design seen on Zia jars in the 1890 to 1920 periods.  Whether it was influenced by Zia’s neighbors at Santa Ana Pueblo is unknown. The jar has a red band under the design area, an indication of circa 1900, plus or minus a decade.

The design was applied from the lower framing lines to the rim without any horizontal divisions, something a little unusual for Zia potters, but not unheard of.  The prime element is the stepped red one, outlined with black lines. The black stems with orange buds at their ends may be vines. Lying horizontal just above the stepped element are stems with berries on their ends, also a floral style.  The red bubbles on the tips of the black elements at the edge of the rim have routinely been called leaves. So, overall, it appears to be a vegetal or floral design concept except for the stepped elements.

In The Pottery of Zia Pueblo book by Harlow and Lanmon, similar stepped elements are referred to as feathers, so perhaps that is what they represent on this jar.  It is a striking design and a refreshing one because it differs from so many designs of the period.

Provenance: this Historic Zia Pueblo Historic Polychrome Pottery Water Jar is from the collection of a gentleman from Washington, DC