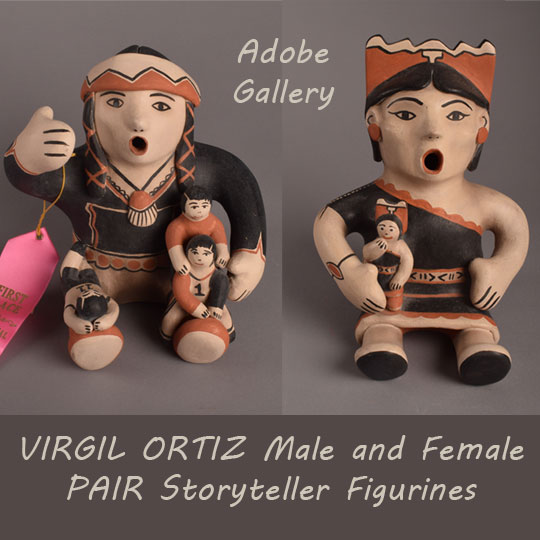 Cochiti Pueblo artist Virgil Ortiz made this storyteller family possibly around 1990, when he was 21 years old.

The female has a beautiful face, with Asian eyes and dark eyebrows.  Her mouth is open, she is wearing earrings, and on her head is a tableta.  Her manta is the traditional pueblo dress.  She is wearing a bracelet and clutching a single little girl in her right arm.

The male is animated with his right arm up as he emphasises what he is telling the three young boys sitting on his legs. He has a headband, laced braids, and a shell necklace.  His shirt is black and has ribbons flowing down the front.  It was awarded First Place at The Original American Indian & Western Relic Show in Pasadena in 1992.

It is not known if these were made as a pair and whether they were entered in the Pasadena Show as a pair, however, they were purchased by the current owner at the same time.

Condition: Both VIRGIL ORTIZ Male and Female Pair Storyteller Figurines are individually signed with the artist’s name and both are in original condition.