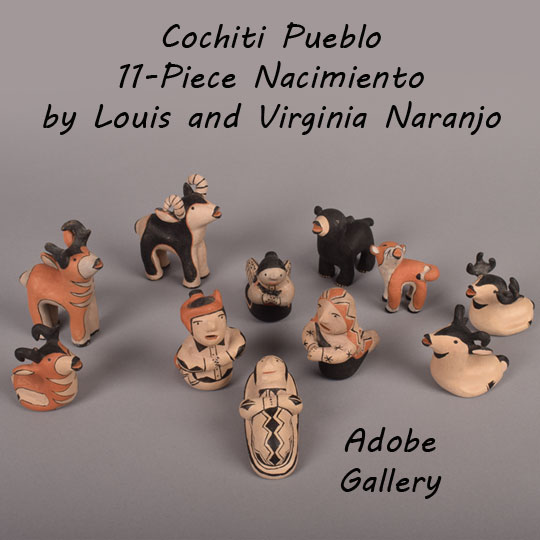 This eleven-piece Pueblo Pottery Nacimiento by Louis and Virginia Naranjo consists of Mary, Joseph and Infant Jesus, and an angel.  The angel has holes in her wings so that she can be suspended over the other figures, if desired.

Louis Naranjo and his wife Virginia are included in the Monthan’s book Nacimientos: Nativity Scenes by Southwest Indian Artisans which was published in 1979.  They state that Louis started making Nacimientos around 1970 so he was part of the movement that occurred at that time. Nacimientos, in fact figures of all kinds, by Louis are among the most collected by those who like figurative pottery.  His pottery is much appreciated because he was technically good at the craft and he had a wonderful sense of humor which he incorporated into his work.

Louis Naranjo (1932-1997) and Virginia Naranjo (b.1932) were standard bearers for the proud figurative pottery tradition of Cochiti Pueblo. They crafted their figurines at the kitchen table in their comfortable adobe home at the pueblo. They worked almost every day crafting their art with great care, joking, and exchanging the gossip of the day as they went along, accompanied by television, children, and grandchildren. Their art provided a good life for them and it provided a legacy that will be with us for another century or more.

Condition: this Cochiti Pueblo 11-Piece Nacimiento by Louis and Virginia Naranjo is in original condition