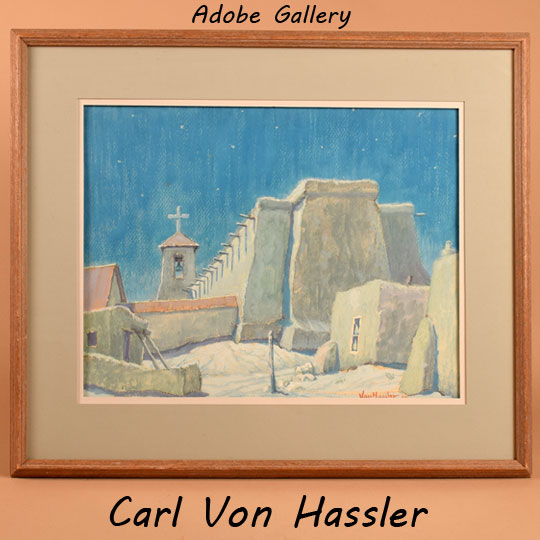 This gouache painting provides a look at Albuquerque painter Carl Von Hassler’s versatility as an artist. According to the original owner, who acquired the painting, this is a depiction of Isleta Pueblo’s St. Augustine Church.  Instead of his usual oil paints, Von Hassler worked with gouache for this piece.  Also atypical is the fact that it is a night scene.  We have handled dozens of Von Hassler paintings over the years, and only a few were set at night.  Interestingly, one of them was a depiction of Taos Pueblo’s church.

Von Hassler’s work here is of his typically fine quality.  Everything here appears as though it would in reality.  Von Hassler’s proportions are accurate, and the church’s walls seem realistically textured.  The church and the surrounding buildings are made of soft, pastel blues and greens, with hints of white on the moonlit walls and hints of purple in the shadowed areas.  A darker, thicker blue serves as the night sky.  Dozens of stars, mostly white, appear in the sky.  Two distant stars—one red, one yellow—add color to the blue and white sky.  With this beautiful, serene depiction of Isleta Pueblo’s church, Carl Von Hassler succeeded at putting the magic of the Southwest onto paper.

The painting is signed Von Hassler and dated '62 in lower right.  It is framed under acrylic in a simple wood frame, with two layers of matting in complementary colors.

Carl Von Hassler (1887-1969) was born March 18, 1887 to a Dutch father and a French mother on a train in Germany. Von Hassler moved to Albuquerque, New Mexico in the early 1920s. He was known as the “Dean of the Albuquerque Art Colony.”  Born in Bremen, Germany, Von Hassler attended the Dusseldorf Art Academy. When he came to the United States, he lived for a while in Greenwich Village in New York and was a member of the famed group of painters who called themselves the “Greenwich Ash Can Group.”  In his early years in Albuquerque, Von Hassler's studio was in the original Casa de Armijo (now La Placita Restaurant) in Old Town. He was best known for his traditional realistic landscapes of New Mexico and his Indian portraits.

He spent almost half of his 47 years here developing a new painting technique that caused a stir in art circles. "I invented it myself," the artist said. "It is known to no one else."  His paintings had an almost ceramic quality with colors that do not fade. He baked the paintings at up to 600 degrees. He also developed what he described as an "atomic substance," which he painted on to withstand the heat. It made his paintings fire and heat resistant.  His works are now collector's items, and many prominent Albuquerqueans own his paintings.  He taught privately, and, among his better known former pupils are Sam Smith, Ben Turner, Walter Bambrook, Novella King, and Betty Sabo.  Von Hassler died in Albuquerque on November 30, 1969, at the age of 83.

Provenance:  this Painting of Isleta Pueblo Church by Carl Von Hassler is from a collection in Northern Virginia. Acquired directly from Von Hassler.

Recommended Reading: Paintings of the Southwest by Arnold Skolnick