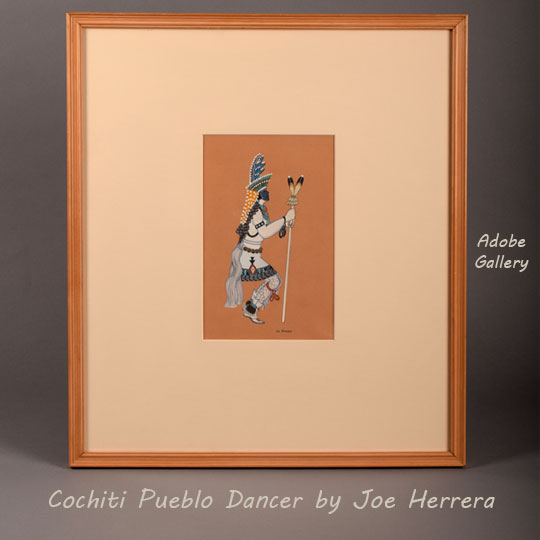 This original painting was created by Joe Herrera of Cochiti Pueblo.  It’s a detailed depiction of a single Antelope dancer, with no background, ground plane, or environmental element of any kind.  This places the painting firmly within the traditional pueblo “flat” style, which was originally practiced and popularized by a small group of San Ildefonso painters.  Herrera had a close bond with this group—it included his mother, Tonita Pena.

Herrera’s ceremonial dancers are always excellent, but this one is particularly strong.  He wears a dance kilt, leggings, moccasins, and an elaborate headdress with antlers.  Herrera went deep into the details of each of these items, using remarkably precise lines and an appealing color palette. He seems to have preferred cool blues and greens, as they appear often in his works.  Here, they have a commanding presence despite being used quite sparingly.  This is an excellent example of Joe Herrera’s work.

The painting is signed Joe Herrera.  It is framed in a thin carved wood frame, under a wide off-white mat.

Joe Hilario Herrera (1923-2001) See Ru was an innovative and successful Native American painter.  His father was from Cochiti Pueblo, and his mother—pioneering painter Tonita Vigil Peña (1893-1949) Quah Ah—from San Ildefonso.  Though his artistic inheritance and early art education came from his mother, Herrera is rightly considered to be from Cochiti Pueblo. He attended the Santa Fe Indian School, served in the US Army during World War II, worked at the Laboratory of Anthropology, and eventually completed a degree in art education at the University of New Mexico.  Dorothy Dunn’s American Indian Painting of the Southwest and Plains Areas states that he “did justice to a fine tradition in his authentically drawn ceremonial subjects.  His work was unlike that of his renowned mother, Quah Ah, for his was coolly decorative where hers was warmly natural.”  Herrera passed away in 2001.

Provenance: this Original Painting of a Cochiti Pueblo Antelope Dancer by Joe Herrera is from the collection of an Arizona family