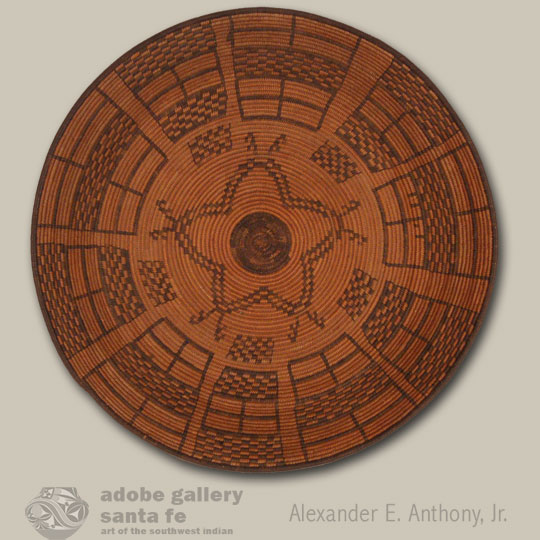 The Western Apaches were not a single tribe, but consisted of five separate and completely independent tribes—the Cibecue, San Carlos, White Mountain, and Northern and Southern Tonto.  They are now considered collectively as Western Apache.

The Western Apache were of less trouble to the United States Government in the 19th century than some of the more aggressive Apache tribes. They were not displaced by the military like the more belligerent Apache of other tribes.  As a result, they retained their lands and much of their culture. Their fine basketry is the best known of the Apache tribes and they are treasured by museums and collectors.

This large Native American Basket bowl likely dates to the very early 20th century and features a design that is most unusual.  The large rectangular panels on the inner wall resemble windows or tall buildings.

Traditionally, and in this basket, the foundation was made from a grouping of three willow rods.  They were placed so tightly together that it appears to be a single rod. The stitches also were made from willow.  The black areas are of devil’s claw. The brown circle of the center of the basket and the brown rim are standard and rarely change.  Between these two areas, the design was from the mind of the weaver.

The five-point star at the base of the basket is much more what one would expect to see in a Western Apache basket, but the design changes drastically on the side walls.  The rectangular elements, and there are ten of them, are bolder than normally seen on Western Apache bowls. They alternate between four-panel windows in the center with checkerboard panels attached, to a pair of four-panel windows with a single panel of checkerboard design in the middle.

Condition:  this Western Apache Very Large Pictorial Basket is in very good condition, with one small nail hole that is evidence of how it was hung on a wall in the past.

Provenance: from a family collection from Colorado

Reference:  Southwestern Indian Baskets Their History and Their Makers by Andrew Hunter Whiteford