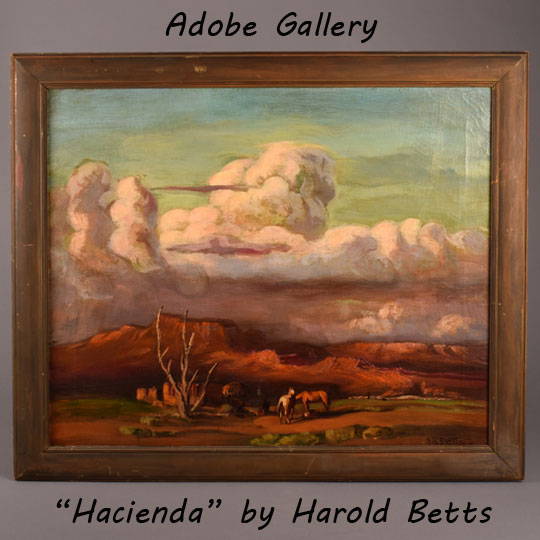 This gorgeous Southwestern scene, titled "Hacienda," was painted by Harold Harrington Betts. It is a classic Southwestern image, executed with style and incredible skill. Even though the painting is nearly 100 years old, it is in marvelous condition, thanks in part to a recent cleaning and coat of varnish by a skilled conservator. We focus primarily on Native paintings, but we will happily present works by non-Indian artists with ties to New Mexico. As far as we know, Betts did not make a home here. However, he spent so much time here painting that, through the success of his artwork, he managed to become a part of New Mexico's history.

In the foreground of “Hacienda,” we see two horses.  Nearby, two people huddle around a small fire.  A bit further in the distance, we have the titular hacienda.  In the background, a distinctively Northern New Mexican sprawl of hills and mesas rolls into a dramatic sky.  A massive, beautiful cloud formation hovers above the earth.  The sky between the clouds and the mesas is a thick haze of purple and gray, suggesting the presence of a wild storm in the distance.  We’ve seen these elements many times in the past; it’s the manner in which they are presented that makes “Hacienda” especially appealing.  The composition as a whole feels relaxed and dreamlike, but Betts’ wonderfully rich color palette elevates the intensity of the scene in a manner that is at once subtle and strong.  Note the bright orange used in the foreground and the mesas, the purple used within the storm, and the sea-green sky above the clouds. Betts combined these intense tones beautifully, creating a truly remarkable image.

The painting is signed H.H. Betts in lower right.  It is framed in a simple wood frame.  The following text is handwritten on verso: ‘Hacienda’, Near Taos NM, by Harold Betts, Chicago, 1928.

Harold Harrington Betts (1881-1951) was an American painter.  Betts was born into a family of artists in New York City.  He initially studied painting under his father, Edwin Daniel Betts, Sr.  Betts went on to exhibit widely and become very successful.  He primarily lived in Chicago, Illinois, and Muskegon, Michigan, but he spent a great deal of time painting in the Southwest.  His preferred Southwestern subjects were the Grand Canyon and the Pueblo Indian villages.  Many of his Pueblo-themed paintings are included in the Santa Fe Railway Collection.  Betts passed away in 1951.

Condition: good condition with some craquelure, recently cleaned and varnished by a professional conservator

Provenance: this Original Painting titled "Hacienda" by Harold Betts is from a private collection

Recommended Reading: Samuels’ Encyclopedia of Artists of the American West by Peggy and Harold Samuels