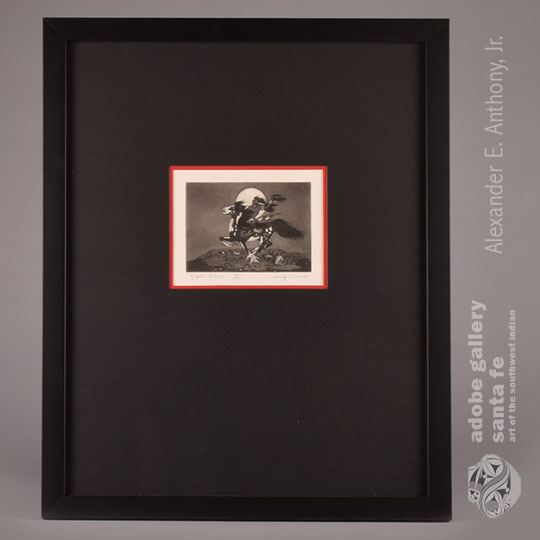 Potawatomi Artist Woody Crumbo is a collectible Native American artist. He did create silkscreens and etchings of his original work to make his creations very affordable to collectors around the world.

In the late 1970s, Woodrow Wilson Crumbo (1912-1989) Woody Crumbo would pack up his silkscreen prints and etchings and sell them from the back of his van.  He was very friendly and would chat with anyone who stopped by his van.  That visitor inevitably left the conversation with one or more prints in his hand.

Crumbo made wooden boxes to hold collections of prints and would sell from those boxes. He would label each box with a notation of the contents. This box is labeled "30 original etchings by Woody Crumbo." In this box were 30 individual etchings, each one numbered 137/200. It is quite likely that an individual purchased the entire collection of etchings and the box. Now there are 4 etchings missing from the box, however, the remaining 26 are available to be sold separately.

It is not known where the etchings were executed or what years they were executed.  It is likely they were made in the 1970s while Crumbo was living in Oklahoma. Each has the title and each is signed and numbered, but not dated.  Each of the 26 etchings is matted identically and shrink wrapped, but not framed.

It is possible that the complete set of 30 etchings represents the lifetime production of etchings by Woody Crumbo.

This single copper plate etching is titled NIGHT RIDER.  It is signed in lower right in the artist’s hand.  It is in original condition. It is believed that it was issued in the 1970s when Crumbo lived in Oklahoma.