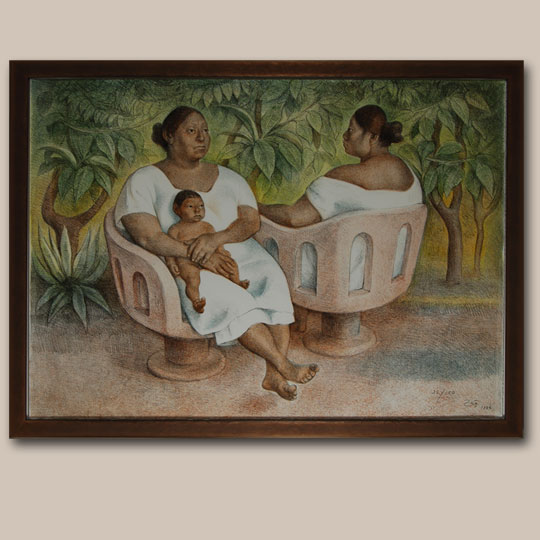 Yucatecas en el Parque is a stone lithograph executed in 6 colors by Francisco Zuñiga.  Yucatecan Women in the Park was printed by Atelier Mourlot in Paris, France.  The publisher was Brewster Editions, New York, New York.  It was printed on handmade Arches Rives & Japan paper.  There were 150 copies in the edition, and this is #32/150.

Francisco Zuñiga was born in Costa Rica at the end of the year 1912.  As an early teenager, he assisted his father at his wood sculpture workshop where carving religious figures predominated.  He began using oil paints at age 14, using his brother and sister as models.  Two years later, he carved his first stone sculpture and it won Second Prize in the National Fine Arts Exhibition.  He continued winning prizes in that competition for successive years.

Zuñiga continued improving his artistic talents, apprenticing with other artists, became sculpture assistant at La Esmeralda School in 1938 and a professor there in 1939. His career advancement was meteoric. In 1942, the Modern Museum of Art in New York purchased a granite sculpture of his and the following year the Metropolitan Museum of Art in New York acquired two of his drawings.  The Phoenix Art Museum in 1965 acquired several Zuñiga sculptures for its permanent collection.

In 1973, Zuñiga worked on his first lithograph in San Francisco, California, for the project Mexican Masters Suite.  He continued working in drawings, lithography, stone sculptures and bronze sculptures for the remainder of his life.

The lithograph is framed in the manner in which the entire paper is visible.  Zuñiga painted his images to the edge of the papers so there is no reason to cover up a portion with mat board.  The paper has been hinged from the back in the proper manner.  It is framed in a contemporary copper-color wood frame.  It is signed Zgā in lower right and dated 1986.

Provenance: from a gentleman in Colorado 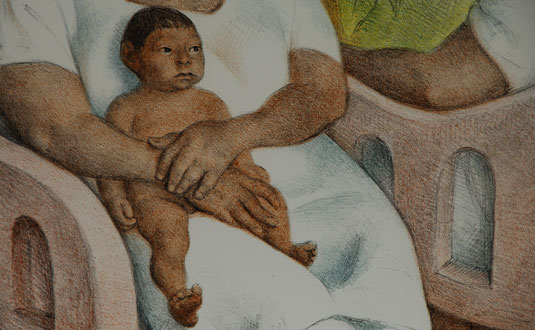 Mexican Modern Masters of the 20th Century [SOLD]
by