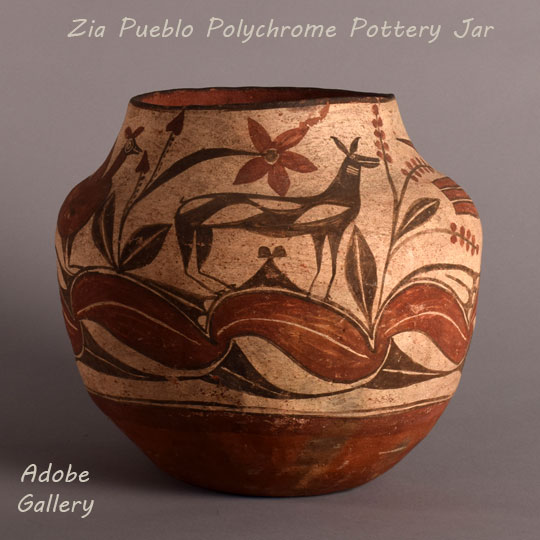 This historic Zia Pueblo polychrome pottery water jar likely dates to the late 1800s.  It shows just enough wear to inform us that it was used at the pueblo, and fortunately, it has not needed any professional restoration or repair.  This sort of visible wear—small abrasions, scratches, a few tiny rim chips, but no cracks or broken areas—is desirable to many historic pottery collectors, and for good reason.   Historic pots with this type of patina invite the viewer to ask questions about their histories.

The jar’s shape is imperfect but undoubtedly appealing, with a minor tilt and a slightly uneven rim.  Its design is excellent.  Four figures—two birds and two deer, alternating—appear around the jar’s surface.  Like the jar itself, they’re somewhat primitive but incredibly enchanting.  They are perched atop a rich red design band, from which plants and flowers emerge, winding up and around the animals to the jar’s rim.  With its multiple elements winding around and interacting with one another, the design, as a whole, feels rhythmic and natural.

A few dark fire clouds appear near the bottom of the jar.  A merchant’s old label, reading “from Zia Pueblo Indians, West of Rio Grande River, NEW MEXICO, 11.00,” appears near the rim.  On its bottom, “430” is written in black marker.  This is likely a dealer or collector’s inventory number.

Condition: wear from use, no restoration or repair

Provenance: this Zia Pueblo Polychrome Pottery Jar with Deer, Birds and Flowers is from a gentleman from Albuquerque