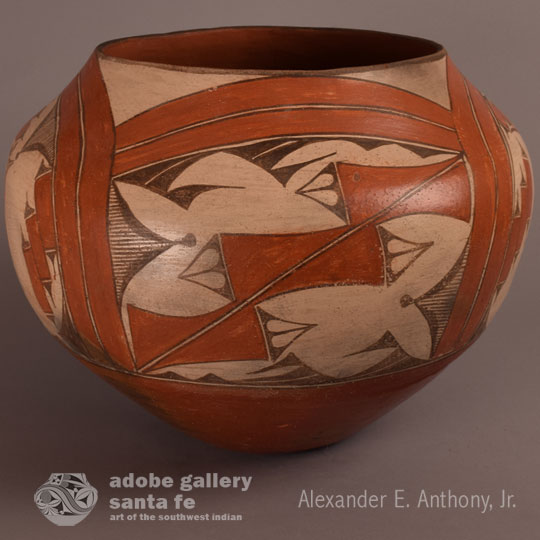 This large storage jar is attributed to Ascensiona (Aguilar) Pino.  The attribution is made based on design elements on the jar that are identical to a published jar in the Philbrook Museum of Art which was gifted by Clark Field in 1942, that had been purchased from Ascensiona in 1939.  The specific design elements are the stacked orange triangular tipped feathers, back-to-back, divided by parallel black lines, each stack tipped with a black outlined triangle.  (Harlow & Lanmon 2003:294)

The rim of the jar is black, the interior neck is red, and there is a red band just below the lower framing line.  Below the red band, the slip is red and stone polished. The bottom of the jar is flat in true fashion for storage jars.  The jar is not signed and is estimated to date to the 1930s.

Provenance: from the extensive collection of Zia pottery of a Colorado resident