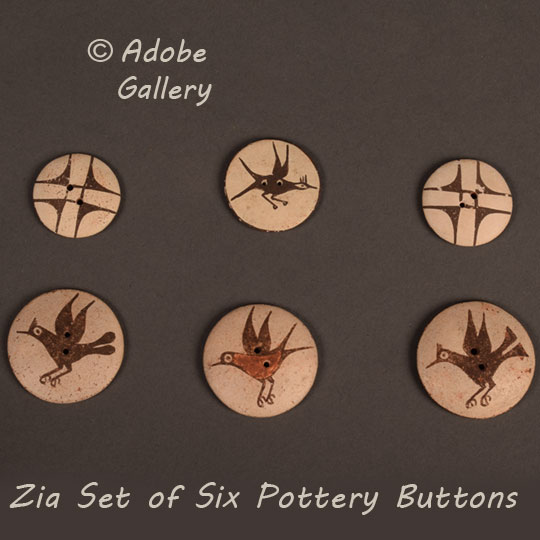 Three of these Zia Pueblo pottery buttons measure one inch in diameter, and the other three measure 1-⅜" in diameter. Two of the smaller ones feature designs of right-angle elements with curved black filled edges. The other four buttons each have a Zia bird symbol of different styles.

By the beginning of the twentieth century, Zia Pueblo potters had joined the Diné of the Navajo Nation and Pueblo neighbors in producing items to sell to tourists. These items were generally smaller and were easy for the tourists to carry home. There were the usual table items-cups, saucers, candle holders, salt and pepper dispensers and related items. But the Zia potters were very creative and developed the idea of making buttons.

The following history of pottery buttons is from The Pottery of Zia Pueblo page 313:

"Pottery buttons were introduced during World War II when silver was scarce. A note in an acquisition ledger at MIAC documents the introduction of pottery buttons by Harviana Toribio about 1942-1943.

"POTTERY BUTTONS: Two Zia pottery-makers (women) began making fired-pottery buttons during the winter of 1942-1943, when silver became ‘frozen.' They started out making only one size (about the size of a dollar), slightly concavo-convex, with four holes for sewing on; they painted the convex surface with typical black and cream, resulting in a polychrome. The price, fifteen cents each. By 1943 Fiesta, many pottery [potters] were making these buttons, & the standard price was 25ȼ each. All seemed to have just 2 holes for sewing on."

We are fortunate to feature a collection of six of these buttons. They are truly a perfect example of the ability of the Southwestern Indian to adapt to changing markets and materials. Each of the buttons is fitted with two sewing holes. None of the buttons is signed with the name of the maker.

Provenance: these Zia Pueblo Set of Six Pottery Buttons are from the collection of a family from Colorado