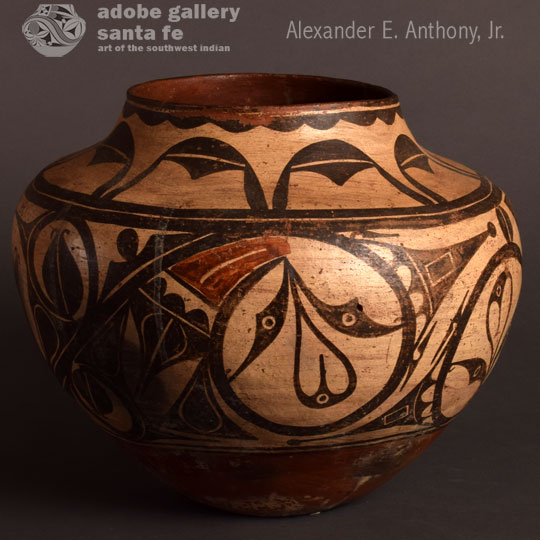 The designs associated with the Trios period are some of the most elegant and beautiful designs applied to pottery during the later Zia period. We are fortunate that some potters who were experienced with the Trios design continued producing it into the later period. The design is a very rich dark brown on cream slip, with just a hint of red.

The very bold spiral that predominates the body design has been named a “capped spiral.”  The leaf-like design on the interior of the spiral is referred to as a “trident filling.” The Eiffel-tower-like design attached to the spiral are the “caps” referred to above.  The split black element with two hooks at its top represents a seedpod. All of these design elements from the Trios Polychrome period are represented in this jar of the Zia Polychrome period.  The designs encircling the rim have been designated as “stylized feather caps.”  The red design on the jar is known as a “nestled feather.” According to Harlow and Lanmon, referring to the nestled feather, “Later jars show some variations in detail, but the placement and seeming intention are always  the same.” Harlow and Lanmon, 2003:68

All these element names are not important but are included here to illustrate that some effort has been exerted by someone to name each element, so we might as well use those names in their honor. One can be sure that the elements were not given their names by the Native potters, but were most likely established by later researchers.

Condition: this Zia Pueblo Magnificent Large Trios Polychrome Design Pottery Jar is in very good condition with some calcium deposits on the lower body, evidence of prior use as a water jar. There is a pop-out on one of the side panel design areas (see above and below) so it is not noticeable.