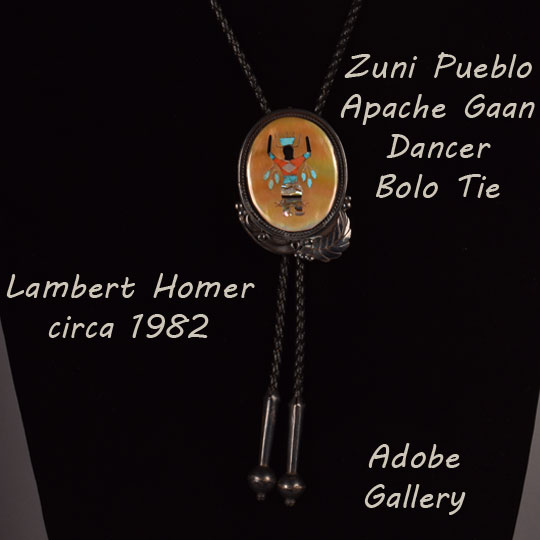 In this lovely Zuni Pueblo Apache Gaan Dancer Bolo Tie and Pendant by Lambert Homer, Jr. circa 1982, he follows in his father’s footsteps and crafted an image of an Apache Gaan, or Mountain Spirit Dancer. He cut and shaped pieces of shell, jet, coral and turquoise and set them in a mosaic style in a glimmering yellow shell background. The oval was then set within a beautiful sterling setting. The artist created this medallion to be worn as a bola tie or as a pendant on a chain. It can easily be slid off the leather and hooked on a chain.

Lambert Homer Jr. was the son of well-known Zuni lapidary artist Lambert Homer Sr. and the grandson of Leekya Deyuse.  Along with his father, Lambert Homer Sr., he worked for the legendary trader C. G. Wallace. Wallace became a trader at Zuni Pueblo in 1920 and revitalized the jewelry making tradition at Zuni Pueblo by introducing new tools and working closely with the artists. He hired only the most talented artists and marketed their work to the tourists visiting the Southwest. The result of this endeavor was the creation of some of the most beautiful pieces of Native American jewelry made in the early 20th century. Lambert Homer Sr. is credited with being the first to incorporate the Apache Gaan Dancer as a motif.

The ga'an (Western Apache) or gaa'he (Eastern Apache) are powerful mountain spirits friendly to the Apache people. The dancers represent mountain spirits during the ceremony and, as such, embody sacred beings. There are various myth stories surrounding the ga'an. One is that the ga'an were responsible for liberating the animal spirits locked in a cave where Crow had imprisoned them. The animal spirits could then roam free and provide food for the Apache. Source: SECOND FACE Museum of Cultural Masks website

Although unsigned, the original owner kept meticulous records and has labeled this piece as being purchased at the New Mexico State Fair in 1982 and being made by Lambert Homer, Jr.