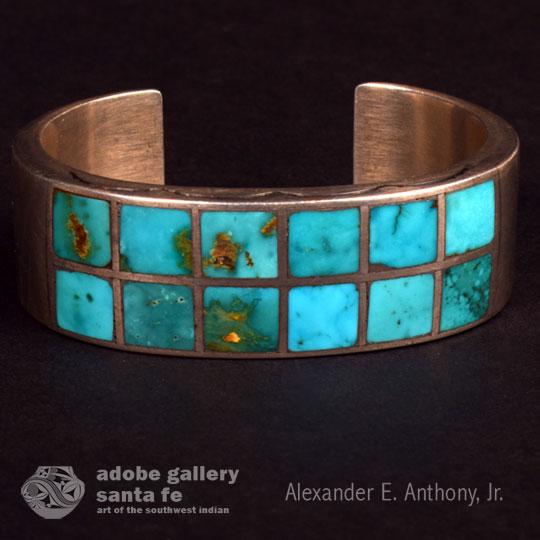 This bracelet with its beautiful Blue Gem turquoise gemstones and its exquisite silverwork is most probably an example of the type of work by both Diné and Zuni jewelers. As the style has come to be associated with Zuni, Adobe Gallery has labeled the origin as Zuni. As was the custom at the time, it is unsigned.

Twelve square sections of Blue Gem turquoise were set evenly within slender silver channels in this 1950s Zuni bracelet.  The square gemstones were set on a wide silver band that was delicately stamped on the sides. In her book, Southwest Indian Jewelry, Dexter Cirillo defines the style: “Channel inlay consists of gluing pre-cut stones into small cloisonnes of silver that have been soldered perpendicular to a base and then grinding the stones until they are flush with the surface. The silver dividers that hold the stones in place become part of the pattern.”

The channel inlay technique originated before WWII at Zuni Pueblo. Known for hundreds of years as fine lapidary artists, Zuni craftsmen were adept at cutting and shaping turquoise as well as shell, jet and other gemstones. It was only natural that eventually they would incorporate the small cut pieces of gemstone into silver. While there were certainly some Zuni craftsmen who were skilled silversmiths, the majority of the silverwork in the first part of the 20th century was made by Diné silversmiths.

In a December 1954 article in El Palacio magazine, David L Neumann writes that, “Of recent years there has developed, originally at Zuni, a type of jewelry called “channel” in which the openings in the silver work are shallow cloisonnes, divided by silver ferrules in the manner of a brass worker preparing a piece for enamel. However, the skill of the Navaho in working silver is as distinctly superior to the Zuni  (with few exceptions) as the skill of the Zuni in cutting stones is peculiar to the Zuni. For this reason a considerable group of Navaho smiths, most of them in the neighborhood of Manuelito, New Mexico, have given most or all of their time of recent years to producing nothing but silver work divided as indicated above into shallow areas intended to be filled with turquoise. Such pieces, when brought into Gallup and sold to the traders, are then issued to stone cutters, who cut to fit the openings, and insert the cut stones, cementing them into place and then giving the pieces a final polishing after having set the stones so that the surfaces of silver and turquoise come to have one plane—a highly polished, continuous surface.”

Condition: This Zuni Pueblo Channel Inlay Bracelet with 12 Square Turquoise Gemstones is in excellent condition. The turquoise gemstones are intact and the silverwork is solid.

Provenance: The bracelet is from a member of the Maisel family of Albuquerque, New Mexico.  Adobe Gallery has just learned that after 42 years of business, the owner of Skip Maisel's Indian Jewelry & Crafts is retiring and closing his iconic store on Central in the heart of Downtown Albuquerque.