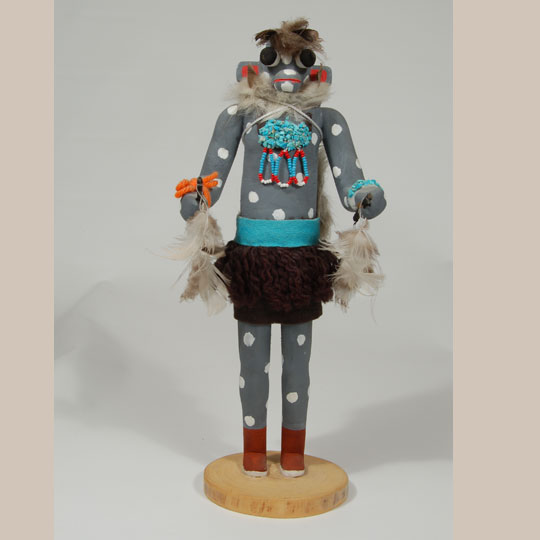 A Zuni informant told Ruth Bunzel, “He is an angry dancer, and the people are afraid of him.  They called him to come when the earth cracked, and since then he comes with the mixed dance.  He comes when it is cold, and they say he brings the cold weather.  They say he warns the people when misfortune is coming.  Anyone who expects a baby will go to his home and look for omens.  Last year a man went there and he saw lots of turquoise, but when he went to pick it up there was none there.  He came back and told the people, and they said it meant that the people would have lots of turquoise, and a little later a man came down from Gallup with lots of turquois, and the people bought a great deal.  He doesn’t live at Katcina Village, but in a canyon south of Itiwana.”  Bunzel, 1932

According to Zuni Myth, he came over with the Hopi who were called by Zuni after an earthquake.  He fixed the cracked earth and was given a place to live south of Zuni.  Because he did not speak Zuni, he simply repeated anything that was said to him so they call him Echo old man.

The carving, by Ben Seciwa,  is very well executed. Body proportions are more true to life than most Zuni carvings. The artisan put turquoise chips on the chest and added beaded jaclas to complete the jewelry. It appears that he is carrying “fire sticks” in both hands.

Condition:  It is in very good condition.

Provenance: from a Kachina - Katsina Doll collector in Oregon to whom we sold this doll in 2004

Treasures of the Zuni (Treasures) (SOLD)
by Theda Bassman