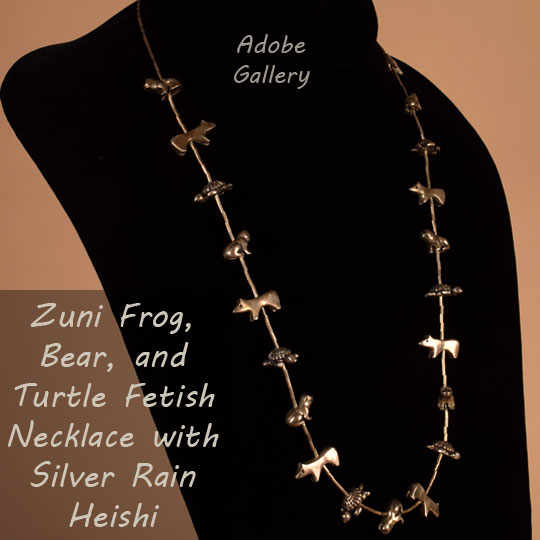 This is a silver fetish necklace featuring bears, turtles, and frogs.  If one is unfamiliar with the term fetish, it refers to a carving or likeness of an animal, imbued with its special forces and power and is most often something created by tribes of the American Southwest.  The wearer is then able to ask for assistance with any problem from the animal fetish in a time of need.

Small tubular beads have been made, and in this form are referred to as silver rain heishi.  Strung from the clasps, it is not hard to understand their namesake as they glimmer like raindrops under a stormy sky.  Intermittently, seven frogs and bears alternate between six turtle fetish animals.

Each animal was formed with great care.  Long-bodied bears bring strength, introspection, and power of the soul.  Crouching, wide-eyed frogs will bring the wearer rain in times of drought.  Lastly, intricate turtles offer longevity and a connection to Mother Earth.

This necklace was likely made in the 1980s, as that is when they seem to have been first popular.

Condition: This silver animal fetish necklace is in excellent condition.

Provenance: This Zuni Frog, Bear, and Turtle Fetish Necklace with Silver Rain Heishi is from an estate in eastern Washington.