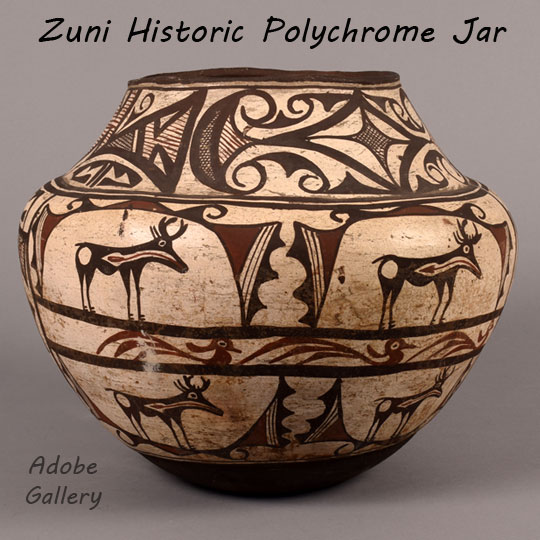 Shortly before 1870, a change began to be implemented by potters: painting the interior of the neck and the underbody with black pigment.  In early cases, black pigment was applied over the red interior neck paint.  In those vessels, the red is faintly visible through the black.  Of course, a change of this nature did not occur overnight, but may have occurred over a decade or several decades.  It is believed that the change on the neck interior was completed by 1865. On the underbody color, it was not completed until 1900.

The very pronounced puki flexure on earlier Zuni jars greatly decreased over time to a less pronounced one.  Puki lines are noticeable as late as 1920, but not afterwards.  A puki bulge is the result of starting the build up of the clay in a bowl or other vessel.  As the jar is built up, the weight of the wet clay bulges out over the rim of the puki, leaving a distinct bulge at that level.  This bulge previously was left in that state but later, as jars were made for the tourist trade, the bulge was sanded away.

Zuni jars made after 1850 display a more elaborate design on the body and a more repetitive design on the neck. The body design starting around 1870 features two large design panels in a horizontal layout and two smaller panels in a vertical layout. The larger panels were divided in half by a horizontal band containing simple birds with elaborate tails. Above and below the birds were floral-like designs or, in some cases, deer.  The vertical panels featured non-plant and non-animal designs such as volutes or arrowheads. Neckband designs on Zuni Polychrome jars seem to be standard over decades with very little freedom for the potter to innovate.  Double ended scrolls and dagger elements predominate.

Based on these and other documented designs, it is determined that this large Zuni Polychrome jar dates to the 1870s.  The interior neck appears to consist of black pigment over red, the underbody is black and there is a definite, although not too pronounced, puki flexure.  The design is separated into neck and body, with the body consisting of deer in feather houses, below which are deer enclosed by feather crooks.  Between the upper and lower deer is a band of red birds with beautiful, flowing, elaborate tails.  There is no black outlining on the birds.

The vertical panels on the body have a circle outlined by black caps and above and below the circle are dagger-type elements in heavy black outlining. Fine red lines and cross hatches appear in the interior.

All of the design elements on this appear in a wonderfully strong, bold application. The reds and blacks share a common hint of gray, which links everything together effectively. The designs are complex, but they flow naturally into and around one another. The vessels’ form is gorgeous, and it is in fine condition for its age. This is an exemplary piece of historic Zuni Pueblo pottery.

Condition: very good condition with a stabilized hairline rim crack that has not been concealed by overpainting.  The jar is in very stable condition.

Provenance: this Zuni Pueblo Historic Polychrome Jar with Bold Designs is from the collection of a New York resident.

Reference and Recommended Reading: The Pottery of Zuni Pueblo by Lanmon and Harlow, 2008.  This 604-page book is the authoritative publication on Zuni pottery and consistently used by us for reference.