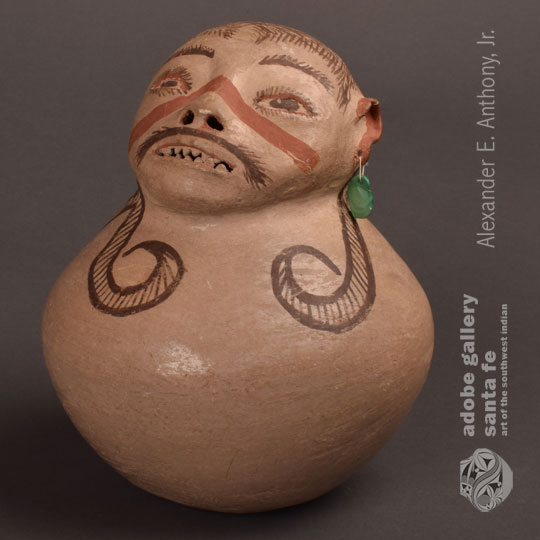 This historic roly-poly figurine of a male with a turquoise earring is unusual for pottery from Zuni Pueblo as it does not relate to other figurative pottery from that pueblo. Examination of the clay color of the bare paste of the teeth does appear to be that from Zuni Pueblo. The swirls filled with parallel black lines are like designs on Zuni pottery.

There are two similar figures in the collection of the Museum of Northern Arizona, Flagstaff, that are labeled as of Zuni origin. One of them appears to have been made by the same person who did this one. Their acquisition records indicate that they are from Zuni Pueblo. The museum acquired both of those in 1974. They have not assigned a date when they were made.

In personal conversation with Dwight Lanmon, co-author of the extensive book on Zuni pottery, he said that he did not encounter a similar figure in his research of historic Zuni pottery. He noted that the collections assembled in the late 1800s by the Smithsonian and other museums do not have such figures in them. This piece could be one that existed at that time and was overlooked. This type of figurative Zuni pottery appears to be rare and unique, and it could be assumed that not many were created and that the few around were just not discovered. It may have even been created by a single potter or potters in the same family, thus limiting its exposure even more. At any rate, we think it is possibly from circa 1900, but we cannot verify that.

There is an object on the inside that flips around indicating that it may have been meant to be a rattle. A single turquoise earring is suspended from the left ear, but none on the right one. What is the meaning of the red stripe across the nose? Is it war paint? The mustache is not a typical trait of Zuni men but is typical of Diné males. Is this supposedly a figurine of a Diné man as a warrior? These interesting questions remain unanswered and probably will for the foreseeable future.

Condition: an insignificant crack running from left side of mouth up to left nostril. The right ear lobe has been repaired so there might have been an earring previously.

Provenance: this Zuni Pueblo Bulbous Male Historic Pottery Figurine with Turquoise Earring is from a gentleman in Pennsylvania