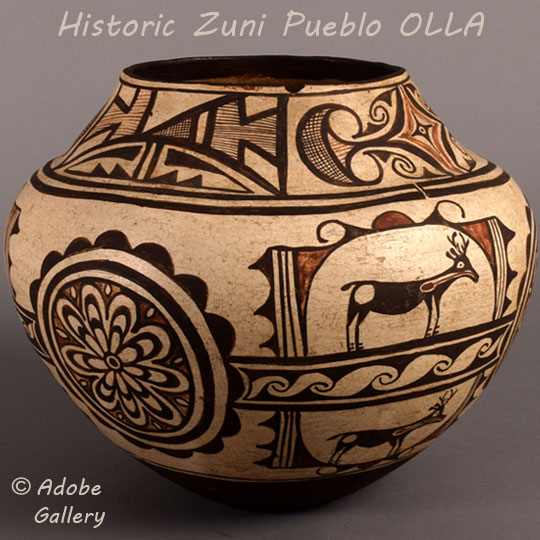 This OLLA was created by an unknown Zuni Pueblo potter. From the look and feel of the piece, we would estimate that it’s about 100 years old. Its form recalls earlier Zuni Pueblo OLLAs, but its curves are a bit gentler and softer. Many Zuni Pueblo pottery jars make sharp turns inward at the shoulder, briefly becoming horizontal before curving sharply again to the rim. This particular piece uses mellow transitions and never becomes flat in the shoulder area. It’s an appealing shape, and the olla looks even and well-balanced from any viewpoint.

The design work that appears on this water jar or OLLA sticks closely to tradition by using three bands—two circling the body, and a slightly smaller one circling the neck. The band circling the neck uses elements unrelated to those that appear below, which is also a common attribute of Zuni Pueblo pottery vessels. A pair of lines with a ceremonial break separates the upper band from the lower pair. This pair of lines is traditionally the first element to be painted onto the jar.

The primary design, which occupies the lower two bands, is a particularly strong example of classic Zuni Pueblo design motifs. Heartline Deer appear in pairs, standing within semicircles that rise up and hang down from the series of lines dividing the two lower bands. Intricate rosette or medallion designs appear in between each pair of Heartline Deer. This pattern repeats three times around the olla’s body. None of these elements is out of the ordinary, but there’s something about the manner in which they were arranged that strikes us as extraordinarily alluring. This is a fine example of late historic era Zuni pottery.

What is a Heartline? The heartline is used primarily by Zuni Pueblo potters and can be seen in many animals – usually a deer, called a Heartline Deer.  The line from the mouth to the heart signifies the "breath of life."

Condition: Very good condition for its age, with one rim chip. No restoration or repair

Provenance: this Historic Polychrome OLLA with Traditional Zuni Designs is from a private collection